The construction of the ESO Very Large Telescope (VLT) advances rapidly, both in Europe and in Chile. These three photos show some of the main mechanical parts of the first 8.2-metre telescope, as they presented themselves in Milan (Italy) on Thursday, September 7, 1995. Two versions of these photos, one smaller and one larger and with better image resolution, are accessible for convenient transfer over the networks.

The mechanical structure of VLT Unit Telescope no. 1 is now in the process of being mounted at the Ansaldo Energia premises in Milan (Italy).

The so-called main structure (i.e., telescope azimuth and altitude mechanical structure, including hydrostatic bearing system, direct drives and direct mounted encoding system) was designed and is being built by the Italian consortium AES, composed of Ansaldo Energia (Genova), SOIMI (Milan) and EIE (Venice). Already two months from now, in November 1995, the complete, enormous mechanical structures of this telescope will be moving on the azimuth hydrostatic bearing tracks, using the direct drive system designed and built by the PHASE Company (Genova, Italy). The thorough testing phase will start by the end of December 1995 or at the beginning of January 1996.

ESO Press Photo eso9525a shows the lower part of the azimuth structure of the telescope (the fork) on the concrete pier on which the azimuth tracks (hydrostatic bearing journal) are mounted. The very high accuracy of this enormous structure (compare with the persons in the photo!) is illustrated by the fact that the "run-out" of the azimuth axis of the fork has been measured as only 80 microns (0.08 millimetres) on 90 degrees turning angle. This is a remarkable result, especially since the centering of the axis is done on a radial journal with a diameter of no less than 9 metres.

When the fork is equipped with all auxiliary systems, it will weigh about 320 t, will be 18 metres long and 8 metres wide. It will carry two Nasmyth platforms, each measuring 6 x 4 metres and situated 5.8 metres above the azimuth platform (here covered by plastic sheets).

ESO Press Photo eso9525b shows the centre piece of the telescope tube which provides the attachment points to the primary and secondary mirrors and has the shafts for the telescope altitude axis. It is 10.5 metres wide and 10 metres long and weighs about 56 t. To the shafts, here lying on the altitude hydrostatic bearing system, are attached the direct drives, which provide a maximum torque of 72 kNm. The associated encoder system is specified to deliver an absolute accuracy of 0.1 arcsec (rms).

The third view, ESO Press Photo eso9525c shows the top ring of the main strucure mounted and aligned, already painted in its definitive silver color (the interior part that faces the optical path will later be painted black to minimize internal optical reflections).

This top ring holds the secondary mirror unit. The inner diameter is 8.7 metres and it weighs 7.5 t. Following a careful study, it has been given a rounded shape in order to minimise the wind forces which are expected during the night at Paranal (an average of 10 to 15 m/s) without compromising the strict requirements for mechanical stiffness. 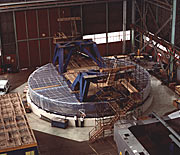 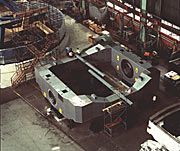 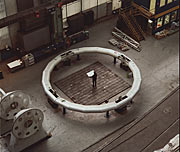 PR Image eso9525c
Early construction on VLT
Send us your comments!
Subscribe to receive news from ESO in your language
Accelerated by CDN77
Terms & Conditions