A brand new image of comet Hale-Bopp, showing its famous jet that comes out of the nuclear region, has just been released.

This photo is a false-colour reproduction of the central part of a CCD frame that was obtained by visiting astronomers Mats Dahlgren (Uppsala Astronomical Observatory, Sweden) and Felix Lahulla (Observatorio Astronomico Nacional, Madrid, Spain), observing with the Dutch 0.90-metre telescope at the ESO La Silla observatory in Chile. The pixel size is 0.44 arcsec and the field measures approx. 1.2 x 1.2 arcmin. North is up and East is to the left.

It is a 2-min exposure, taken through a red filtre, just before midnight (UT) between August 31 and September 1, 1995. The astronomers cleaned and flat-fielded the image before it was transmitted to the ESO Headquarters in Garching (Germany) where it was colour-coded for display on the ESO WWW Hale-Bopp Homepage.

It clearly shows the now famous jet (see also ESO Press Photo eso9522), extending from the centre towards upper right (North-West). A provisional interpretation is that it originates in an active area, located near the rotation pole on the surface of the cometary nucleus. Rough calculations of the motion of the dust, based on the shape of this jet, indicate that it must have been present since quite some time. However, it is not possible, from these observations alone, to tell whether the outflow of dust is still continuing at the same rate. Only more observations, in particular of the innermost shape of this feature, can tell whether this is so. 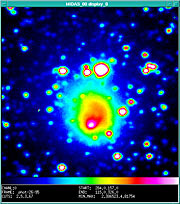 PR Image eso9523a
An "international" comet Hale-Bopp image
Send us your comments!
Subscribe to receive news from ESO in your language
Accelerated by CDN77
Terms & Conditions