In the evening of August 17, 1995, famous comet hunter William Bradfield (Australia) discovered his seventeenth comet. He found the comet as a 6th magnitude object with a tail longer than 1 degree in the southern constellation Crater. Soon thereafter, observations were made at the ESO La Silla Observatory with various telescopes.

Some of the most detailed observations were made by Alain Smette and Manuel Pizarro with the multi-purpose EMMI instrument at the ESO 3.5-metre New Technology Telescope (NTT). They were obtained early in the evening while the sky was still not quite dark and at very low elevation angle, when the comet was only 30 degrees from the Sun.

The large photo is a reproduction of a direct 20 second exposure, made on August 19 through a red filtre. It shows the elongated coma and the beginning of a very long, narrow ion tail in the SE direction, twisting under the action of the solar wind. Several streamers are also visible near the head in this general direction. The field of the frame is 9.1 x 9.1 arcminutes and the exposure was made while the telescope was tracking the comet.

The next evening, a spectrum of the comet's head was obtained with spectral coverage from 4900 A (left) to 6200 A (right) in the green-yellow region. During the 60 second exposure, the spectrograph slit was oriented along the main tail at position angle degrees. It shows three main band systems of the C molecule, known as the Swan bands, with band heads at 5165, 5635 and 6192 A, respectively. They are seen in most comets that approach the Sun and are named after the English pioneer spectroscopist William Swan (1828 - 1914), who first observed these emissions in hydrocarbons. 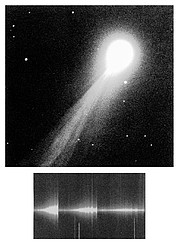