The observations of the bright comet 1995 Q1, now named after its discoverer, William Bradfield, continued for the third night in a row at La Silla (19 - 20 August 1995). Two telescopes were employed to obtain more unique data of this interesting object.

The most detailed observations were made by Alain Smette and Manuel Pizarro with the multi-purpose EMMI instrument at the ESO 3.5-metre New Technology Telescope (NTT). They were obtained early in the evening while the sky was still not quite dark and at very low elevation angle, as the comet is now only 30 degrees from the Sun.

The first image shown here is a direct 20 second exposure, made through a red filtre at UT 23:45 on August 19. It is the best image of the comet's head obtained so far. It shows the elongated coma and the beginning of a very long, narrow ion tail in the SE direction, twisting under the action of the solar wind. Several streamers are also visible near the head in this general direction. The field of the frame is 9.1 x 9.1 arcminutes and the exposure was made while the telescope was tracking the comet.

The comet's position was accurately measured on this frame and contributed to the computation of the preliminary orbit (see below).

The second EMMI image shows the first spectrum obtained of this comet. The spectral coverage extends from about 3650 Angstrom (left) to 4100 Angstrom (right) in the violet region. The spectrograph slit was oriented along the main tail at position angle ~ 145 degrees. The total slit length was 5.6 arcminutes. The spectrum is typical for a comet at Comet Bradfield's current distance from the Sun (0.5 A.U., or about 75 million kilometres).

The horizontal line corresponds to the nearly continuous emission from the brightest point in the coma; it represents to a large extent the sunlight reflected off the material in the coma. The vertical lines to left of the centre are the violet emissions bands from the CN molecule (in gaseous form) near 3880 Angstroms. This emission can be traced to the edge of the frame, i.e. nearly 3 arcminutes from the centre. Other emission bands are seen to the right; some of these come from the C3 molecule, also present in the coma. A subsequent analysis of the strengths and extensions of the individual lines in these bands will give important information about the physical conditions in the cometary coma.

Also this evening, more exposures were made with the ESO Schmidt telescope by Guido Pizarro and Patrice Bouchet. On a 14-minute exposure, the main tail was seen to split into two separate tails at a distance of about 1 degree from the comet's head. The rapid changes in the ion tail represents the violent action of the solar wind on the electrically charged particles emanating from the comet.

Prospects for observations from the northern hemisphere

Thanks in particular to the very efficient work by Australian observer Gordon J. Garradd (Loomberah, New South Wales), Brian Marsden of the IAU Central Telegram Bureau has now been able to compute a provisional, parabolic orbit and the ephemeris for this comet (see IAU Circular 6208, issued on August 20, 1995, or consult the Astronomical Headlines published by the Central Bureau for Astronomical Telegrams).

According to this, the perihelion passage will take place on August 31, at a distance of about 66 million kilometres from the Sun. At this time, the comet will be nearly 200 million kilometres from the Earth and its magnitude will remain near 5. It will be located near the celestial equator and because of its proximity in the sky to the Sun, it will be very difficult, if not impossible, to observe. Later in September, it will move further north and become visible from the northern hemisphere, but at that time it will probably be somewhat fainter than now.

From the present orbit, the comet would have been only ~ 70 million kilometres from the Earth in late July 1995. 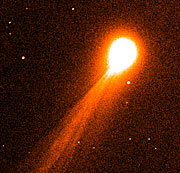 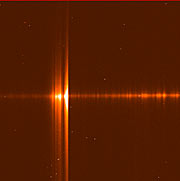