First enclosure on its way to Paranal!

During the past months, vast progress has been made in the construction of ESO's 16-metre equivalent Very Large Telescope (VLT). This major scientific and technological project aims at installing the world's largest optical telescope in the form of four interconnected telescopes with 8.2-metre mirrors on the Paranal mountain in the Chilean Atacama desert. It continues to be on schedule as it heads towards its completion, just after the year 2000.

An important milestone will be reached in early October 1994 when the first large shipment containing heavy steel parts of the enclosure for VLT Unit Telescope no. 1 leaves the Italian port of Genova [1]. Meanwhile the construction work on the Paranal site is also progressing very well. It is now expected that, as planned, the first enclosure will be ready in May 1995 to receive the first 8.2-metre telescope.

This Press Release is accompanied by four colour pictures that illustrate some of the most recent developments.

Considerable progress has been made by ESO's industrial partners in Europe, and the VLT Project has now entered into a new and dynamic phase of construction.

The first 8.2-metre mirror is currently in the middle of a two-year polishing process at the REOSC company near Paris, and the first interferometric tests have shown that this very delicate operation is progressing well. The enormous mirror surface, with a total area of more than 50 m^2, is slowly but steadily approaching the desired shape which must be achieved within a few hundred-thousandths of one millimetre over the entire surface.

Mirror blank no. 2 is now ready at the Schott factory in Mainz (Germany) and will be delivered by barge transport to REOSC in October 1994. Blank no. 3 has successfully completed the critical ceramization phase and blank no. 4 will soon receive the same treatment.

The circular steel track, 18 metres in diameter, that will support Telescope no. 1 has now been
successfully machined at the Ansaldo factory in Genova (Italy). The substructure on which this track and the complete telescope steel structure will be pre-erected before shipment to Chile was constructed at the Ansaldo factory in Milan. Elements of the telescope fork structure were also welded and machined here. In addition, many of the subsystems of  the telescope tube, motors and encoders are now in an advanced phase of manufacture.

The full integration of the first telescope will take place in Milan during the test-assembly phase in the first half of 1995. It will then for the first time be possible to fully appreciate the enormous size of this structure. All structural elements for the complex enclosure that will protect Telescope no. 1 have now been machined at IDROMACCHINE in Mestre near Venice. It was decided to perform a pre-erection assembly there of a few critical parts in order to test thoroughly performances and interfaces.

At the beginning of October 1994, the first shipment of steel parts of this enclosure with a total weight of more than 100 tons will leave Europe for the sea journey to Chile. While the smaller parts are packed in large containers, special packing is necessary for the very large structures. The ship will depart from the port of Genova and is expected to dock in Antofagasta towards the end of November 1994, after which the parts will be transported by truck to the top of Paranal.

This first shipment will be soon be followed by others; it is expected that consignments of about 100 tons each will be sent to Chile every two weeks over the next eight months.

Meanwhile, the construction work on the top of Paranal continues at full speed. About 350 people employed by the construction firm SKANSKA/Belfi now live in the completed base camp and work in shifts day and night on the mountain.

The photos accompanying this Press Release show the state of the extensive work by mid-September. The tunneling for the many underground passages is finished, the concrete base for Telescope no. 1 is nearing completion, and the baseplate for no. 2 is ready. The aerial view gives a vivid impression of well-organised "chaos" now reigning at Paranal and it is hard to believe that when this phase is over, supposedly towards the end of 1996, only the four telescope enclosures will be seen on the completely flat mountain platform -- all other infrastructures, including the large interferometric laboratories, will again have been completely covered. This is necessary to ensure the best possible wind-flow pattern over and around the mountain and enclosures and thereby also allow the sharpest possible astronomical images to be obtained with the giant telescopes.

The anti-seismic supports to be embedded in the foundations for protection against the strongest earthquakes, have already arrived in Chile and will be installed below enclosure no. 1 during the next few weeks. It is then intended to start the erection of the major parts of this enclosure in mid-December 1994, immediately following the termination of the construction of the concrete support.

This work will start with the assembly of the lower, fixed part of the structure that carries the circular track on which the upper part rotates. It is expected that this will last about six months and that the first enclosure will be ready in May 1995. The erection of enclosure no. 2 will begin immediately afterwards and will be followed by nos. 3 and 4. This work should be terminated by the end of 1996.

The heavy parts for Telescope no. 1 will arrive at Paranal shortly after May 1995. However, before the telescope assembly inside the enclosure can begin, a rotating coude platform will have to be installed below, directly on the base plate that will also carry the entire telescope structure above.

The lower telescope structure will then be built on top of the two circular tracks and later the telescope tube will be attached at the top. Then follows the installation of the optics, including the 8.2-metre main mirror and the first astronomical instruments.

Then arrives the long-awaited moment when the telescope will open its giant eye towards the Universe for the first time; astronomers refer to this special event as "first light". Finally, the telescope will be thoroughly tested, before it is made generally available to the astronomers. This will probably happen about three years from now, in late 1997. The other three telescopes will be installed during the following years. 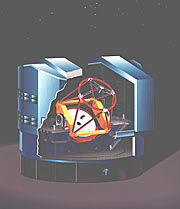 PR Image eso9414d
Early construction on VLT
Send us your comments!
Subscribe to receive news from ESO in your language
Accelerated by CDN77
Terms & Conditions