On March 28, 1993, American astronomers David Jewitt and Jane Luu on Hawaii discovered a slow-moving minor planet of magnitude 23. More observations were made the following night, confirming the unusual motion and indicating that it is located at a very large distance from the Sun, possibly far beyond Pluto, the outermost known, major planet. It was given the preliminary designation 1993 FW (IAU Circular 5730)

It was unfortunately not possible to obtain any further observations of this interesting object, also not during the next dark-moon period in April, and despite its slow motion, there was some concern that it might be lost again among the myriads of faint celestial objects. However, with the help of a rough, predicted location, furnished by the IAU Minor Planet Bureau in Cambridge, Mass. (USA), 1993 FW was observed again in May 1993, this time at ESO.

These are the most recent CCD images of 1993 FW. They were obtained with the 1.5-metre Danish telescope at the La Silla observatory by ESO astronomer Olivier Hainaut who also found the faint images after careful comparison ("computer-blinking") of the frames. They were immediately transferred via the permanent satellite link to the ESO Headquarters in Garching (Germany) where very accurate positions of 1993 FW were measured and communicated to the Minor Planet Bureau. Here, Brian Marsden was able to compute a rough orbit and to show that the present heliocentric distance of 1993 FW must be between 39 and 48 AU (5,800 million to 7,200 million kilometres), placing this object at the mean distance of Pluto (39.8 AU) or beyond (IAU Circular 5796).

At the time of the ESO observations, the motion was only 1.7 arcsec/hour, corresponding to a shift of 41 arcseconds between the upper- and lower-most frames.  The diameter of 1993 FW, as deduced from the brightness and distance, is probably a few hundred kilometres.  This object is similar to minor planet 1992 QB1 which was discovered last year, see ESO Press Release 08/92 of October 2, 1992.

More observations are now needed to refine the orbit of 1993 FW. They will be attempted in June and possibly also in July, before it moves behind the Sun as seen from the Earth and becomes unobservable until the end of the year.

On these photos, North is up and East is to the left. The scale of the photos is such that the full width is 1.5 arcminutes. 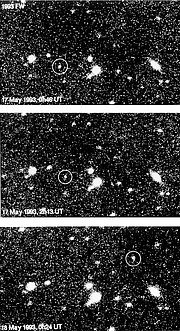