Most Distant Minor Planet in the Solar System

This photo shows the newly discovered minor planet 1992 AD which is the most distant in the solar system. It was obtained at the ESO La Silla Observatory on 5 February 1992. The telescope followed the planet whose 16.7 magnitude image is round; the stars in the field are seen as short trails. The diffuse trail at the upper right corner is that of a galaxy

1992 AD was discovered with a special camera in Arizona, USA on January 9, 1992; the designation indicates that it was the fourth minor planet to be found in the first half of January 1992. When more observations became available, it was possible to compute its orbit around the Sun. It turned out that  1992 AD has the most exreme motion of all  known minor planets in the solar system: it moves in an inclined, highly elliptical orbit that reaches from just inside Saturn's orbit to well outside the orbit of Neptune. In mid-1991 it passed the point closest to the Sun at a distance of 1287 million km. The orbital period is just over 93 years and when it is farthest from the Sun in 2037, it will be no less than 4850 million km away. When the present photo was made, it was 1297 million km from the Sun.

The diameter of 1992 AD is of the order of 150 km. As can be seen on the photo, it is not surrounded by an atmosphere. Spectral observations at ESO confirm this.

After the discovery of minor planet  (2060) Chiron in 1977, 1992 AD is only the second minor planet to have been found in an orbit that is almost entirely beyond that of Saturn. Chiron has an atmosphere, at least at the present time.

The existence of 1992 AD strengthens the belief held by some astronomers that there is a whole group of objects out there, waiting to be discovered with more powerful observational techniques now becoming available. Already at the time of the discovery of Chiron, it was inofficially decided that such objects will be given the names of mythological Centaurs, so these planets will supposedly be known in the future as the Centaurs. 1992 AD will be given
a real name when it has been observed during at least three years so that its orbit can be computed with superior accuracy.

Technical data: 30 min exposure in standard V-filtre with the Danish 1.54 metre telescope; Observers: Olivier Hainaut and Alain Smette (ESO). North is up and East is to the left. 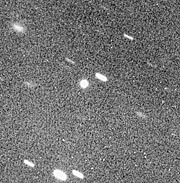