CONICA and FORS: Advanced Electronic Eyes for the VLT

The ESO 16-metre equivalent Very Large Telescope (VLT) [1] will be equipped with technologically advanced instruments that record the light collected by the large mirrors.

ESO has just concluded contracts with two consortia of astronomical institutes, in the Federal Republic of Germany and Italy, for the design, construction and testing of the first VLT instruments. Their great complexity is illustrated by the fact that the institutes expect to invest about 170 man-years in their realization. ESO will support this work with about 6 million DM and will provide the quality control.

These instruments, known under the acronyms CONICA and FORS, will be installed at the VLT from 1996 onwards (see the drawing attached to this Press Release). CONIC A will be unique, while FORS will be built in duplicate. They will take full advantage of the VLT's extremely powerful observational capabilities. They will ensure that the first scientific programmes to be carried out with the new giant telescope will access hitherto unknown areas, well beyond current observational horizons.

A first meeting of all engineers and scientists involved in these projects will take place at the ESO Headquarters on 6 February 1992.

A telescope is a complex structure that carries the optical mirrors which focus the faint light received from distant objects in the Universe. However, a telescope without instruments is like a human being without senses: its full potential is only realized when this light is registered by sensitive detectors in attached instruments, optimized for different types of scientific investigations.

The importance of providing astronomical telescopes with the best possible instrumentation cannot be overestimated. ESO intends to spend about 50 million DM, just for the instruments which will be installed at the VLT. This will ensure that the largest optical telescope in the world will also be equipped with state-of-the-art cameras, spectrographs and other specialized instruments.

However, the VLT will have a total of no less than 18 different foci (four at each of the four 8.2-m unit telescopes and two foci where the light beams from these are combined) and therefore at least as many top-class instruments. To design and build them in one decade is in itself an enormous task, hardly possible for any single institute or organisation, nor for the European Southern Observatory itself which is now fully engaged in building the VLT proper. For this reason, and also in order to more intensively involve the European astronomical community of future VLT users, it was early decided that most of these instruments will be constructed in close collaboration with scientific institutes and high-technology companies in the ESO member countries. At this moment it is planned that just four of the major VLT instruments will be built at ESO.

In 1991, and following a one-year preparatory phase after which a number of astronomical institutes were invited to participate in a tendering for two types of VLT instruments, ESO's Finance Committee agreed that contracts for these should be placed with two consortia of leading European astronomical institutes. The selection process was very competitive and several proposals of high quality emanated from the community, all of which conformed with the very tough technical requirements. The stringent financial limits also played an important role in the present decision. The chosen consortia have proven merits in the instrumental field and can look forward to great challenges and opportunities during the coming years.

A consortium of the Max-Planck-Institut fur Astronomie, Heidelberg, the Max¬Planck-Institut fur Extraterrestrische Physik, Garching and the Osservatorio Astronomico di Torino will build the COude Near-Infrared CAmera CONICA to be installed in a specially designed laboratory at the coude focus below VLT Unit Telescope no. 1 in 1997.

Another consortium of the Landessternwarte Heidelberg, the Universitiits¬Sternwarte Goitingen and the Universitiits-Sternwarte Munchen will construct two copies of a FOcal Reducer/low dispersion Spectrograph FORS, to be installed at the Cassegrain foci of VLT Unit Telescopes 1 (in 1996) and 3 (in 1998).

The contracts stipulate that ESO will pay for the hardware (about 6 million DM in all) and also exercise the quality control of the projects, while the institutes will provide the manpower, estimated to be about 170 man-years for the design, construction and testing. Moreover, the astronomers at the participating institutes will perform the first observations with the new instruments, immediately following a very thorough testing phase. They will therefore have the privilege of being the first to exploit the great potential of their instruments for important new discoveries, before other groups of European astronomers also begin to profit from the new facilities.

The CONICA instrument (weight ~ 500 kg) will produce the sharpest possible images in infrared light (wavelength region 1 – 5 um) by means of advanced, infrared two-dimensional detectors. This will be possible, partly due to the installation of adaptive optics2 and also by means of the well-proven technique of "speckle interferometry" which is based on the combination of many short exposures by specialized image processing computer routines. This will allow to eliminate almost completely the negative influence of atmospheric turbulence and permit the VLT to achieve the highest possible resolution with an individual S.2-m telescope (~ 0.05 arcsec) during continuous observations at wavelengths 2 um and longer.

In addition to providing direct, infrared images, CONICA will also be able to perform infrared spectroscopy at low spectral resolution, as well as polarimetry.

CONICA will be used for a large number of front-line investigations. Because of its superior ability to collect large quantities of well-focussed infrared light, CONICA can look deeply into even very dense interstellar clouds. One of its prime targets will undoubtedly be very young stars, or even those still in the process of being born, and which are completely imbedded in their opaque natal clouds.

Another programme that will take the fullest advantage of CONICA's very sharp images, will concentrate on finding faint, very-low mass objects in the neighbourhood of stars whose rather bright, but well concentrated images can be almost completely blocked by a sharp mask. Such objects may be either "brown dwarfs", that is "failed" stars which were too light for nuclear reactions to begin in their interiors, or even planet-size bodies. The mysterious centres of the Milky Way and other galaxies will be another obvious type of candidates for CONICA studies.

FORS: the most powerful eye

FORS (~ 2000 kg) will be the real workhorse instrument for the VLT and will be produced in two copies to be installed at two of the 8.2-metre VLT Unit Telescopes. FORS will work in the visual part of the spectrum (320 -1000 nm) and will refocus the collected light so that there will be a perfect match between the size of a stellar image and the individual image elements (pixels) of the very

sensitive CCD detectors. This is necessary because the technique of adaptive optics does not (yet) work in visual light so the size of visual images will be determined by the instantaneous atmospheric turbulence (which is particularly small at the site chosen for the VLT observatory, the Paranal mountain in the Chilean Atacama Desert). In this way, FORS will permit a better concentration of the light so that the faintest possible objects can be observed. A special, "flexure-compensation" system will ensure that FORS will remain extremely stable during the very long exposure times anticipated for the detection and observation of such faint objects.

By means of various optical elements which can be inserted into the light beam, FORS can also perform low-dispersion spectroscopy, multi-object spectroscopy and polarimetry.

It is expected that FORS will be able to produce images of objects of magnitude 30 (about 4000 million times fainter than what can be perceived with the unaided eye) during a cumulative exposure time of only 1 hour. The combination of several such exposures will show even fainter objects. Thus, there is little doubt that some of the first observational programmes with FORS will look significantly further out in space and correspondingly further back in time than what is possible with any existing telescopes. Very remote, young galaxies and quasars will be prime objects and statistical investigations of their distribution will provide a unique possibility to investigate the structure and evolution of the very young universe. It is also possible that FORS will be able to detect galaxies which are actually in the course of being formed.

Another major task of FORS will be to provide accurate distances of more nearby galaxies, in order to establish a firm basis for the cosmological distance scale. This will be done by detailed spectral observations of individual objects in these galaxies, for instance of globular clusters, planetary nebulae and exploding stars, novae and supernovae. With its ability to observe the spectra of up to 19 objects simultaneously, FORS will be a very efficient instrument for observations of this type.

It is expected that spectra sufficiently detailed to permit rather accurate abundance analysis can be obtained of stars of magnitude 20, i.e. in galaxies well beyond the Local Group at a distance of about 15 million light-years, that is much further than before possible. This will give a first indication of whether or not the chemical composition is the same as in our Milky Way, and therefore if the Universe is homogeneous on this scale. 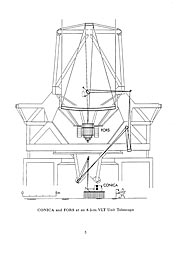 PR Image eso9201a
An 8.2-m VLT Unit Telescope with the FORS and CONICA instruments
Send us your comments!
Subscribe to receive news from ESO in your language
Accelerated by CDN77
Terms & Conditions