Weighed and Found Too Light

Observations with the 3.5-m ESO New Technology Telescope by a European group of astronomers have shown that a very compact object in an extraordinary binary star, known under the astronomical designation 88433, is most probably a neutron star and not a black hole, as previously believed by most scientists. Improved observation techniques have allowed a reliable determination of the mass of this object: it is now found to weigh less than the Sun and is therefore not massive enough to be a black hole.

In 1977, American astronomers C. Bruce Stephenson and Nicholas Sanduleak published a list of stars with emission lines in their spectra. These lines originate in the atmospheres of very hot stars or in gaseous nebulae in their immediate neighbourhood. Such objects are astrophysically very interesting, because they represent short-lived evolutionary stages in the lives of stars, and they are accordingly rare.

Object no. 433 in this list, designated SS4SS, is a 14th magnitude star in the equatorial constellation of Aquila (the Eagle). It was soon noted that its position coincided with a point-like source of radio emission, and also that the UHURU satellite had detected an X-ray source in the same direction already in 1976. There was also an extended radio source, W50, in this sky area.

However, the unique nature of SS433 was only revealed when spectroscopic observations were made at optical wavelengths. They showed the presence of intense emission lines of hydrogen for which enormous velocities were deduced from the measured Doppler shifts (the change in wavelength due to the motion of the light-emitting atoms). The hydrogen atoms in SS433 moved with velocities as high as 17 % of the velocity of light, much higher than what would be expected or had ever been seen in any individual star in the Milky Way and surprisingly similar to what is observed in some highly energetic, external galaxies. Moreover, the velocities regularly varied from 50,000 km/sec in the direction away from us to 30,000 km/sec in our direction, with a period of 163 days.

Long-term photometric measurements of the amount of light emitted by SS433 in different wavebands also showed periodic changes. In particular, it appeared that the system underwent regular eclipses, indicating that the light-emitting object passes behind another object once every 13 days. Some weaker lines in the spectrum were found which had nearly constant velocity, but when studied in detail they revealed small changes in velocity with the same period of 13 days.

A major problem for optical investigations of SS433 is that it lies in a galactic region which is heavily obscured by intervening interstellar clouds; less than 1 %of its light passes through. Still, this strange object created a flurry of interest in the early 1980's, also because it was thought that this "back-yard" system in our own Milky Way might harbour a scaled-down version of the processes which are responsible for the intense radio emission and the jets observed in the energetic nuclei of distant active galaxies, radio-galaxies and quasars.

Ten years of research have now led to a generally accepted interpretation of the strange SS433 system, as shown on the accompanying drawing. It lies at a distance of about 5500 parsec (18,000 light-years) in a densely populated region of the Milky Way. It is a binary star, in which two very different components orbit each other once every 13 days. The larger of the two is a hot star and the smaller is a compact object which is surrounded by a dense and rapidly spinning accretion disk. The larger star is losing mass at an extremely high rate; every year about one millionth of one solar mass is lost from its surface and carried towards the smaller object where it is collected in the accretion disk. SS433 is in a phase of very rapid mass transfer which may last a few million years at the most, perhaps much shorter.

The high-velocity hydrogen atoms which are the origin of the strong emission lines in the spectrum of SS433 belong to two narrow jets of matter that move away from the compact object in opposite directions with speeds of no less than 80,000 km/sec. It is thought that two channels are created in opposite directions near the rotation axis of the thick accretion disk; it is in these channels that energetic processes accelerate the jets.

The jets are not fixed in space; just as the Earth's axis wobbles like a spinning top and thereby describes a small circle in the sky every 26,000 years, the direction of the SS433 jets completes a full revolution in only 163 days. In this picture, the measured velocities of the emission lines can be fully explained by Einstein's Theory of Special Relativity. This interpretation has been confirmed by high-resolution radio observations of the jet structure and of its change of direction, as seen from the Earth.

Radio and X-ray observations have also revealed the interaction of these jets with the gaseous W50 nebula that surrounds SS433 (see the accompanying photograph and the caption text). It now appears that this nebula is the gaseous remnant of an earlier supernova explosion in SS433 during which one of the two stars was transformed into the compact object that is the origin of the observed high-velocity jets.

The mass of the compact object

The above described model of SS433 incorporates a central, highly energetic "engine" which powers the jet emission. It is clearly of great astrophysical interest to discover the true nature of this compact object.

There are two known types of compact objects which can provide the very energetic environment needed to accelerate the matter in the jets to the very high velocities measured, a neutron star or a black hole; both of these are believed to be endproducts of supernova explosions. In both cases, prodigious amounts of energy are released when the material in the accretion disk at ever increasing speed spirals towards the surface of the compact object.

The only way to decide which of the two is present in SS433 is to "weigh" the compact object. If its mass is less than about 3 solar masses, it is very likely to be a neutron star; otherwise it must be a black hole. This is because a neutron star with a mass in excess of this value would be unstable and quickly collapse into a black hole.

This measurement is in principle possible by accurately determining the orbital motion of the two components around each other. The masses of the Earth and the Moon are found in a similar way. However, this is observationally difficult in the case of SS433 and so far the results have been quite uncertain. Until now, a mass of at least 4, perhaps even 10 solar masses was considered most likely for the compact object, tentatively identifying it as a black hole.

Profiting from improved instrumentation, a new attempt to determine the mass of the compact object in SS433 has just been successfully completed by a group of four European astronomers: Sandro D'Odorico (ESO),Thomas Oosterloo (formerly ESO, now Observatorio del Roque de los Muchachos, La Palma, Spain), Tomai Zwitter (University of Ljubljana) and Massimo Calvani (Observatory of Padova, Italy). A report about their findings appears in the September 26 issue of the scientific journal Nature.

With the current practice of time assignment at large telescopes, it is normally impossible to get observing time to monitor the spectrum of one object over several weeks. However, the commissioning of the new E80 Multi-Mode Instrument (EMMI) at the 3.5-metre New Technology Telescope (NTT) offered a unique opportunity to secure excellent spectra of 88433 during the entire I3-day orbital period while various technical tests were carried out with EMMI.

The astronomers obtained 15 high-resolution spectra of 88433 in the blue spectral region, centred on the emission line of ionized Helium, which is present in the accretion disk around the compact object. Thanks to the high quality of the spectral data obtained with the efficient new instrument, careful measurements of the spectral shifts of this line for the first time allowed to determine rather accurately the velocity changes of the helium ions and hence of the accretion disk and the compact object at the centre.

The new data clearly indicate the precise amplitude of the velocity variation due to the orbital motion of the compact object around the larger star in the 88433 binary system. This defines the orbit and together with the ratio of the masses of the two components which is known from X-ray and optical photometry [1], the NTT/EMMI measurements of the Helium emission line lead to a reasonably accurately determination of the mass of the compact object, only 0.8 solar masses. The mass of the larger component is found to be 3.2 solar masses.

This means that the compact object in 88433 is so light that it is very likely to be a neutron star which was created in an earlier supernova explosion in the 88433 system. Even when considering the uncertainties inherent in the observations, it appears highly improbable that this object is a black hole. The diameter of a neutron star with this mass is of the order of 10 kilometres.

The demonstration of the presence of a neutron star in 88433 is an important observational result which has implications for the theory of advanced stellar evolution. It may not please the proponents of black holes, but of course it does not exclude their existence in other celestial objects. 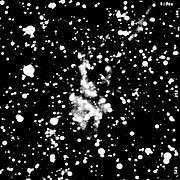 PR Image eso9107b
The SS-433 system (artist's impression)
Send us your comments!
Subscribe to receive news from ESO in your language
Accelerated by CDN77
Terms & Conditions