Famous Comet Halley, now receding from the Sun after its perihelion passage in early 1986, has recently entered into a state of hibernation which will last until shortly before the next passage in 2062.

This is main result of an extensive series of observations at the European Southern Observatory in late February 1990, during which the comet was imaged with an extremely sensitive CCD camera attached to the Danish 1.5 m telescope at La Silla. At this time Halley was 11.6 AU (1735 million km) and 12.5 AU (1870 million km) from the Earth and the Sun, respectively, that is well outside the orbit of the giant planet Saturn.

To see the faint light from the distant object, exposures totalling 980 min (16 hrs 20 min) were obtained. The ``negative'' picture shown here is a composite of 23 frames, each individually cleaned. The image of Halley at the centre is pointlike; the straight lines are trails of stars and galaxies in the field, because the telescope was set to follow the comet's motion. The mean, visual brightness of Halley during the observing period was 24.4 magnitude and brightness variations of 1.3 magnitude were seen.

The measured magnitude is about 0.3 mag brighter than what would be expected from Halley's nucleus alone, an avocado-shaped, 15 km long “dirty snowball'', consisting of a variety of ices and dust. The brightness variations are caused by the tumbling motion of this nucleus, whereby the amount of reflected sunlight depends on the changing profile seen from the Earth.

Of particular interest is the fact that the extended coma (i.e. the dust cloud around the nucleus), which was observed with the same telescope in 1989 at heliocentric distance 10.1 AU, has now completely disappeared. In fact, no coma is visible at the 29 mag/sq.arcsec surface brightness level (this level corresponds to 1500 times less than the sky background emission!).

It is therefore fairly certain that the release of dust from the nucleus must have ceased somewhere between 10.1 and 12.5 AU heliocentric distance. The former coma has now dispersed into the surrounding space and it is no longer being replenished by dust from the nucleus. In order words, Halley seems to have entered a long period of hibernation which is likely to last until about mid-2061 when it again comes within about 5 AU from the Sun and will again be awakened by the sunlight.

Still, an accurate evaluation of the seemingly point-like image seen on this picture indicates that it is somewhat elongated in the direction opposite to the Sun. Together with the extra light observed, this could mean that a very low level of activity is still present and that there may still be some dust in the immediate neighbourhood of the nucleus. 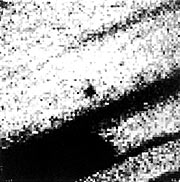 PR Image eso9008a
Comet Halley in February 1990
Send us your comments!
Subscribe to receive news from ESO in your language
Accelerated by CDN77
Terms & Conditions