A Revolution in Ground-Based Direct-Imaging Resolution

"First Light" with the ESO New Technology Telescope (NTT) was obtained on March 23, 1989 (eso8903) during conditions of exceptionally good "seeing'' and the first images are probably the sharpest ever obtained with a large, ground-based telescope. A full account of the associated events will appear in the June 1989 issue of the ESO Messenger.

In the meantime, the best CCD frame of the bright southern cluster Omega Centauri has been subjected to advanced image processing, further sharpening the stellar images. As an illustration of the importance of achieving the highest possible resolution, this Press Release is accompanied by four photos, which also demonstrate the great potential of the ESO New Technology Telescope (NTT), in terms of finer detail and fainter limiting magnitude, as compared to existing telescopes:

General information about the photos is given in the figure captions and further technical details about image D follow below:

The field shown in image D is near the centre of the bright southern globular cluster Omega Centauri. It measures 12 × 12 arcseconds square and covers about 1/16 of the area of a CCD frame, obtained with the NTT on the night of "First Light''. It can easily be identified near the left edge of image C.

A 10 sec unfiltered CCD exposure was made with the NTT at the moment of "First Light'' on March 23, 1989. Part of it is shown below; to the lower left in the "raw" version in which the width of the stellar images (at half maximum intensity) is 0.33 arcseconds, a value never before achieved with a large, ground-based telescope. To the lower right, the same frame is shown after "sharpening'' by advanced image processing; the resolution is now improved to 0.18 arcseconds. The stellar images are noticeably sharper and faint stars are much better visible.

The first (upper left) picture is an enlargement of a photographic plate obtained in 1984 with the ESO Schmidt telescope under seeing conditions mediocre by La Silla standards (2 arcsec). The exposure time was 10 min on unsensitized, blue-sensitive IIIa-J emulsion behind a GG495 filter (spectral range 500 - 540 nm). The original image scale is 67.5 arcsec/mm; i.e. the field shown corresponds to 0.18 x 0.18 mm2 on the original 30 x 30 cm2 plate. In other words, about 2.6 million fields of this size are contained on the Schmidt plate; see also the indication of the field on image A.

Next (upper right) follows an excellent photographic plate obtained at the Cassegrain focus of the ESO 3.6 m telescope in 1977. The exposure lasted 6 min 15 sec and the seeing was 1 arcsecond. The emulsion was IIIa-J and no filter was used (spectral range 300 - 540 nm). The image scale is 7.2 arcsec/mm; on the original 6 x 6 cm2 plate this field measures 17 x 17mm2.

A 10 sec unfiltered CCD exposure was made with the NTT at the moment of "First Light" on March 23, 1989; a small part of it is shown here in two versions. The first (lower left) is the "raw'' 100 x 100 pixel2 image (pixel size 0.123 arcseconds). The Full Width at Half Maximum (FWHM), as measured directly on the stellar images in the frame is 0.33 arcseconds. To this value, the NTT optics contributed perhaps 0.15 arcseconds, so that the actual, atmospherically induced seeing may have been better than 0.3 arcseconds, a spectacular value, even by La Silla standards.

At the lower right, the same frame is shown after "sharpening" by advanced image processing. For this, the frame was subjected to deconvolution with a point spread function, which was empirically constructed from 50 profiles of uncontaminated stellar images and at the same time resampled at 1/5 of the pixel size in both directions. The FWHM is now improved to 0.18 arcseconds; the stellar images are noticeably sharper and faint stars are much better visible. To facilitate the comparison, the intensity scale is the same in both NTT frames.

The image processing was made by Dietrich Baade at the ESO MIDAS facility in Garching with an algorithm developed by Leon Lucy. About 3 hours VAX 8600 CPU time was needed to perform 20 iterations; this time can of course be significantly reduced with other computers, optimized for "number-crunching".

The improvement in resolution is dramatic, as illustrated for instance by the triple star, just right of the field centre. The distance between the two components which are closest to each other, is only 0.79 arcseconds. The Schmidt picture does not indicate any multiplicity, the 3.6 m barely resolves the system, while the NTT shows the three components, well detached from each other. Note also the resolution of the double system near the lower border, here the distance is 0.59 arcseconds.

Since the light is better concentrated on the detector, the higher resolution also leads to fainter limiting magnitudes. The 10 second NTT exposure reaches about magnitude 20. A simple extrapolation then predicts that a limiting magnitude well beyond 27 mag may be reached with the NTT within a reasonable exposure time. The actually achievable value will of course also depend on other factors, like the sky background and the accuracy of the tracking. 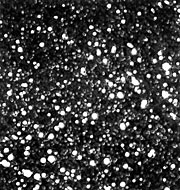 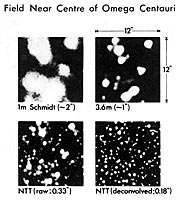 PR Image eso8904d
The importance of high resolution
Send us your comments!
Subscribe to receive news from ESO in your language
Accelerated by CDN77
Terms & Conditions