The Unusual Behavior of Supernova 1987A in LMC

“This supernova is different from all others observed so far".That is the unanimous conclusion of astronomers who have observed supernova 1987A in the Large Magellanic Cloud (LMC) with ESO telescopes since the explosion in late February (see ESO 04/87 and ESO 05/87). The collective results from the ESO La Silla observatory of no less than 38 astronomers have now been submitted to the European journal Astronomy & Astrophysics where they will appear in six "Letters to the Editor'' in the May(I) 1987 issue. These articles cover astrometry, optical and infrared photometry, polarimetry, optical and infrared spectroscopy and high-resolution spectroscopy; they are immediately available in ESO Preprint no. 500 (March 30, 1987) which can be obtained by request to the ESO Information and Photographic Service.

More than one month of intensive observations have now been made of SN 1987A. Measurements of its brightness showed an initial increase to a maximum near visual magnitude 4.5 [1] on February 28. During the next few days, the brightness dropped slightly, but since March 5, it has increased again, reaching visual magnitude 3.96 on March 28. Except for the ultraviolet light, which has been nearly constant since March 10, the intensity has increased in all other spectral regions. In the infrared, the present rate of brightening is about 5 percent per day. It is not possible to predict which brightness SN 1987A will ultimately reach, but it is still more than 2 magnitudes (6 times) fainter than a normal Type II supernova would have been expected to be.

Fast photometry has not yet shown the existence of a pulsar in SN 1987A, that is a rapidly spinning neutron star, supposed to be created in a supernova explosion of Type II. If there is such an object at the centre of SN 1987A, its light must still be obscured by the surrounding, rapidly expanding envelope of material. Infrared observations showed that the temperature of this envelope was 5800 K (5500 C°) on March 1; on this day, the diameter was 5600 times the diameter of the Sun, that is almost equal to the size of the orbit of planet Neptune. Ten days later, the temperature had dropped to 5200 K and the diameter of the envelope had grown to 9100 times that of the Sun. The expansion velocity has dropped from initially 18.000 km/sec to about 10.000 km/sec in late March. The total luminosity is now about equal to 100 million Suns. Some days ago, there were signs of some extra light in the far infrared (12 μm), maybe because the strong light from the supernova was being reradiated by surrounding interstellar dust (“infrared echo").

The spectrum has changed rapidly, in fact much more rapidly than any other supernova known so far. Only 20 days past maximum, the optical spectrum already resembled that of a Type II supernova, 100 days after maximum light. But some astronomers express doubt whether SN 1987A can be classified as Type II, or whether it perhaps belongs to a different, hitherto unknown type. The spectra which were obtained during the past few days show more and more features, possibly suggesting that the surrounding envelope is breaking up into smaller pieces and filaments.

Accurate astrometry indicates that SN 1987A's position in the sky is less than 0.1 arcsecond from where a 12th magnitude, warm and heavy star, Sanduleak -69 202, was seen before the explosion. It is still not clear whether it was this star that blew up, or whether the supernova originated in a very close companion star. Measurements of earlier photographic plates seem to indicate that this hypothetical companion could not have been a bright, cool supergiant. Until now, most theories predicted that such a star (a socalled M supergiant) should be the progenitor of Type II supernova.

No less than 24 narrow absorption line systems have been detected in very-high resolution spectra of SN 1987A. They originate when the light from the supernova passes through interstellar clouds in the LMC and in our Galaxy, and also through clouds in intergalactic space between them. The presence of Calcium, Sodium and Potassium has been observed and also Lithium-7. This is the first time ever that neutral Lithium, Calcium and Potassium have been detected in interstellar space outside the Galaxy.

This Press Release is accompanied by a colour picture of SN 1987A and the Tarantula Nebula in LMC. It is based on three B/W photos obtained by the ESO 1 m Schmidt telescope.

[1] In the astronomical magnitude scale, smaller numbers signify brighter stars. The brightest stars have magnitudes near 0. The star Polaris near the celestial North Pole has magnitude 2. A star of magnitude 4.5 is about 10 times fainter than Polaris 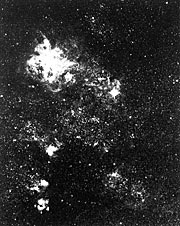 PR Image eso8706a
Supernova 1987A and the Tarantula Nebula
Send us your comments!
Subscribe to receive news from ESO in your language
Accelerated by CDN77
Terms & Conditions