Quasar-like Activity in the Outskirts of an Eliptical Galaxy

A European group of astronomers has discovered an extreme example of `quasar-like' activity in an otherwise normal radio galaxy. What is most remarkable in this case is that the activity occurs not at the galaxy's centre, but in its halo at a distance of about 30000 light years from the centre. This important result, which is based on observations at the ESO La Silla observatory, opens new and exciting lines in galaxy research [1].

Although quasars are seen as star-like objects in optical telescopes, they are believed by most astronomers to be extremely energetic sources of radiation, situated in the centres of galaxies. They far outshine the emission from surrounding stars and gas in these galaxies. Quasars emit not only optical light but also radio, infrared, ultraviolet and X-ray radiation and because of their brightness, they can be detected at very large distances. Somewhat less luminous examples of the quasar phenomenon are known closer to our Galaxy. They are called Active Galactic Nuclei (AGN) and are seen typically in what are known as Seyfert galaxies and sometimes in radio galaxies.

Radio galaxies are most often of the elliptical type with very smooth images on ordinary photographs. Some of them also exhibit the AGN phenomenon. It is believed that such galaxies have powerful sources of energy in their nuclei that create oppositely directed jets of energetic particles. The jets escape the visible galaxy to fill huge areas (lobes) with highly energetic atomic particles. It is these lobes that can be `seen' with radio telescopes as a classical `double' radio source. In some radio galaxies, the jets themselves can be seen clearly at radio wavelengths. There are also several cases known where regions of interstellar gas are being impacted by jets, thereby creating glowing clouds or `blobs' which are visible in optical light.

One such galaxy is PKS 2152-69, situated in the southern constellation Indus. It is a relatively nearby radio galaxy; its distance is estimated to be around 500 million light years. It has a double-lobed radio structure but, being so far south, it is beyond the reach of present high-resolution radio telescopes. Recently, the astronomers observed this galaxy through special optical filters in front of a very sensitive CCD (Charge-Coupled Device) detector at the 2.2 m telescope at La Silla. These filters isolate the light emitted by hydrogen and nitrogen and, after computer processing, the recorded images clearly show the glowing clouds of gas in this galaxy (see attached photo). A large cloud, which appears to be at least 30,000 light years from the galaxy's centre, was studied in detail using spectrographic equipment with a similar detector on the ESO 3.6 m telescope. Surprisingly, the observed spectra revealed emission lines which are characteristic of some very highly ionized ions. For instance, the presence in this gas cloud of Ca+4, Fe+6 and Fe+9 ions (calcium atoms with four electrons missing, iron atoms with six and nine electrons missing) was demonstrated. Spectral lines from these ions are characteristic of only the most extremely excited of active nuclei of galaxies or quasars and they testify to the extraordinarily high energies in the gas cloud.

By comparing the intensity of emission in different spectral lines with theoretical calculations, the astronomers were able to show that the energy source exciting the gas cloud must be very similar in character to that responsible for the activity seen in many AGN's. This gives an important clue to the nature of the source and suggests that it is associated with jets of energetic particles that push their way through the material composing the galaxy. Because these jets are so highly `collimated' (parallel, non-diverging flow) they constitute a very efficient way of transporting a large amount of the energy which is generated in the nucleus and depositing it thousands of light years away. One of the most important aspects of this study is that, by seeing the `nuclear' activity well outside the crowded and complex region of the nucleus, it is possible to get a clearer view of some of the exotic mechanisms which operate there.

In addition, understanding the physical state and chemical composition of the interstellar gas in elliptical galaxies is of great and topical importance to astronomers since only in the last decade has it been realised that these galaxies contain any significant quantity of gas at all. Firstly, cool hydrogen gas in some ellipticals was detected by radio observations and, more recently, X-ray observations revealed massive amounts of hot (ten million or more degrees) gas around these galaxies. If the origin and evolution of such halos can be determined, astronomers will come closer to solving the long-standing puzzle of why some galaxies have spiral and others have elliptical shape.

Optical observations like those referred to also provide detailed information about the composition and state of motion of galaxy halos. The work reported here is part of an extensive programme at the European Southern Observatory and the Space Telescope-European Coordinating Facility to observe the interstellar gas in elliptical galaxies using both ground-based and orbiting telescopes. The Hubble Space Telescope, now scheduled for launch late in 1988, will provide an unprecedentedly clear view of objects such as PKS 2152-69 and, by opening up the ultraviolet part of the spectrum to scrutiny, will make a giant step in the study of galactic nuclei and the way in which their enormous energy output influences the surrounding galaxy.

[1] A B/W photo is attached to this Press Release; a false-colour photo is available on request.

A report about this work will appear in the February 5, 1987 issue of the scientific journal Nature. The full text of this article is also available as ESO Scientific Preprint no. 482 (January 1987).

The Space Telescope-European Coordinating Facility is housed at the ESO Headquarters and is operated jointly by the European Space Agency (ESA) and the European Southern Observatory. 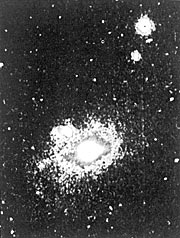 PR Image eso8702b
False-colour CCD-image of the southern radio galaxy PKS 2152-69
Send us your comments!
Subscribe to receive news from ESO in your language
Accelerated by CDN77
Terms & Conditions