The Flames of Betelgeuse

Using the VISIR instrument on ESO’s Very Large Telescope (VLT), astronomers have imaged a complex and bright nebula around the supergiant star Betelgeuse in greater detail than ever before. This structure, which resembles flames emanating from the star, is formed as the behemoth sheds its material into space.

Betelgeuse, a red supergiant in the constellation of Orion, is one of the brightest stars in the night sky. It is also one of the biggest, being almost the size of the orbit of Jupiter — about four and half times the diameter of the Earth’s orbit. The VLT image shows the surrounding nebula, which is much bigger than the supergiant itself, stretching 60 billion kilometres away from the star's surface — about 400 times the distance of the Earth from the Sun.

Red supergiants like Betelgeuse represent one of the last stages in the life of a massive star. In this short-lived phase, the star increases in size, and expels material into space at a tremendous rate — it sheds immense quantities of material (about the mass of the Sun) in just 10 000 years.

The process by which material is shed from a star like Betelgeuse involves two phenomena. The first is the formation of huge plumes of gas (although much smaller than the nebula now imaged) extending into space from the star’s surface, previously detected using the NACO instrument on the VLT [1]. The other, which is behind the ejection of the plumes, is the vigorous up and down movement of giant bubbles in Betelgeuse’s atmosphere — like boiling water circulating in a pot (eso0927).

The new results show that the plumes seen close to the star are probably connected to structures in the outer nebula now imaged in the infrared with VISIR. The nebula cannot be seen in visible light, as the very bright Betelgeuse completely outshines it. The irregular, asymmetric shape of the material indicates that the star did not eject its material in a symmetric way. The bubbles of stellar material and the giant plumes they originate may be responsible for the clumpy look of the nebula.

The material visible in the new image is most likely made of silicate and alumina dust. This is the same material that forms most of the crust of the Earth and other rocky planets. At some time in the distant past, the silicates of the Earth were formed by a massive (and now extinct) star similar to Betelgeuse.

In this composite image, the earlier NACO observations of the plumes are reproduced in the central disc. The small red circle in the middle has a diameter about four and half times that of the Earth’s orbit and represents the location of Betelgeuse’s visible surface. The black disc corresponds to a very bright part of the image that was masked to allow the fainter nebula to be seen. The VISIR images were taken through infrared filters sensitive to radiation of different wavelengths, with blue corresponding to shorter wavelengths and red to longer. The field of view is 5.63 x 5.63 arcseconds.

This research was presented in a paper to appear in the journal Astronomy & Astrophysics. 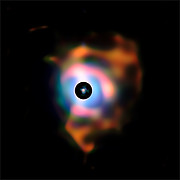 PR Image eso1121b
The star Betelgeuse in the constellation of Orion

PR Video eso1121a
Zooming in on the flames of Betelgeuse
Send us your comments!
Subscribe to receive news from ESO in your language
Accelerated by CDN77
Terms & Conditions