The Rose-red Glow of Star Formation

The vivid red cloud in this new image from ESO’s Very Large Telescope is a region of glowing hydrogen surrounding the star cluster NGC 371. This stellar nursery lies in our neighbouring galaxy, the Small Magellanic Cloud.

The object dominating this image may resemble a pool of spilled blood, but rather than being associated with death, such regions of ionised hydrogen — known as HII regions — are sites of creation with high rates of recent star birth. NGC 371 is an example of this; it is an open cluster surrounded by a nebula. The stars in open clusters all originate from the same diffuse HII region, and over time the majority of the hydrogen is used up by star formation, leaving behind a shell of hydrogen such as the one in this image, along with a cluster of hot young stars.

The host galaxy to NGC 371, the Small Magellanic Cloud, is a dwarf galaxy a mere 200 000 light-years away, which makes it one of the closest galaxies to the Milky Way. In addition, the Small Magellanic Cloud contains stars at all stages of their evolution; from the highly luminous young stars found in NGC 371 to supernova remnants of dead stars. These energetic youngsters emit copious amounts of ultraviolet radiation causing surrounding gas, such as leftover hydrogen from their parent nebula, to light up with a colourful glow that extends for hundreds of light-years in every direction. The phenomenon is depicted beautifully in this image, taken using the FORS1 instrument on ESO’s Very Large Telescope (VLT).

Open clusters are by no means rare; there are numerous fine examples in our own Milky Way. However, NGC 371 is of particular interest due to the unexpectedly large number of variable stars it contains. These are stars that change in brightness over time. A particularly interesting type of variable star, known as slowly pulsating B stars, can also be used to study the interior of stars through asteroseismology [1], and several of these have been confirmed in this cluster. Variable stars play a pivotal role in astronomy: some types are invaluable for determining distances to far-off galaxies and the age of the Universe.

The data for this image were selected from the ESO archive by Manu Mejias as part of the Hidden Treasures competition [2]. Three of Manu’s images made the top twenty; his picture of NGC 371 was ranked sixth in the competition.

[2] ESO’s Hidden Treasures 2010 competition gave amateur astronomers the opportunity to search through ESO’s vast archives of astronomical data, hoping to find a well-hidden gem that needed polishing by the entrants. Participants submitted nearly 100 entries and ten skilled people were awarded some extremely attractive prizes, including an all expenses paid trip for the overall winner to ESO’s Very Large Telescope (VLT) on Cerro Paranal, in Chile, the world’s most advanced optical telescope. The ten winners submitted a total of 20 images that were ranked as the highest entries in the competition out of the near 100 images. 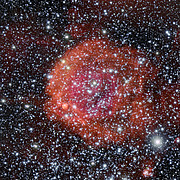 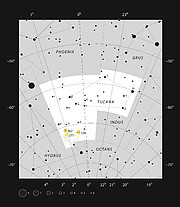 PR Video eso1111a
Zooming in on the cluster and nebula NGC 371
Send us your comments!
Subscribe to receive news from ESO in your language
Accelerated by CDN77
Terms & Conditions