The nebula Messier 78 takes centre stage in this image taken with the Wide Field Imager on the MPG/ESO 2.2-metre telescope at the La Silla Observatory in Chile, while the stars powering the bright display take a backseat. The brilliant starlight ricochets off dust particles in the nebula, illuminating it with scattered blue light. Igor Chekalin was the overall winner of ESO’s Hidden Treasures 2010 astrophotography competition with his image of this stunning object.

Messier 78 is a fine example of a reflection nebula. The ultraviolet radiation from the stars that illuminate it is not intense enough to ionise the gas to make it glow — its dust particles simply reflect the starlight that falls on them. Despite this, Messier 78 can easily be observed with a small telescope, being one of the brightest reflection nebulae in the sky. It lies about 1350 light-years away in the constellation of Orion (The Hunter) and can be found northeast of the easternmost star of Orion’s belt.

This new image of Messier 78 from the MPG/ESO 2.2-metre telescope at the La Silla Observatory is based on data selected by Igor Chekalin in his winning entry to the Hidden Treasures competition [1].

The pale blue tint seen in the nebula in this picture is an accurate representation of its dominant colour. Blue hues are commonly seen in reflection nebulae because of the way the starlight is scattered by the tiny dust particles that they contain: the shorter wavelength of blue light is scattered more efficiently than the longer wavelength red light.

This image contains many other striking features apart from the glowing nebula. A thick band of obscuring dust stretches across the image from the upper left to the lower right, blocking the light from background stars. In the bottom right corner, many curious pink structures are also visible, which are created by jets of material being ejected from stars that have recently formed and are still buried deep in dust clouds.

Two bright stars, HD 38563A and HD 38563B, are the main powerhouses behind Messier 78. However, the nebula is home to many more stars, including a collection of about 45 low mass, young stars (less than 10 million years old) in which the cores are still too cool for hydrogen fusion to start, known as T Tauri stars. Studying T Tauri stars is important for understanding the early stages of star formation and how planetary systems are created.

Remarkably, this complex of nebulae has also changed significantly in the last ten years. In February 2004 the experienced amateur observer Jay McNeil took an image of this region with a 75 mm telescope and was surprised to see a bright nebula — the prominent fan shaped feature near the bottom of this picture — where nothing was seen on most earlier images. This object is now known as McNeil’s Nebula and it appears to be a highly variable reflection nebula around a young star.

This colour picture was created from many monochrome exposures taken through blue, yellow/green and red filters, supplemented by exposures through an H-alpha filter that shows light from glowing hydrogen gas. The total exposure times were 9, 9, 17.5 and 15.5 minutes per filter, respectively.

[1] Igor Chekalin from Russia uncovered the raw data for this image of Messier 78 in ESO’s archives in the competition Hidden Treasures (eso1102). He processed the raw data with great skill, claiming first prize in the contest for his final image (Flickr link). ESO’s team of in-house image processing experts then independently processed the raw data at full resolution to produce the image shown here. 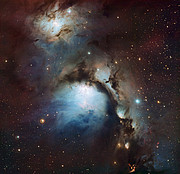 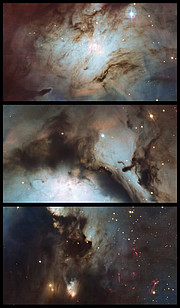 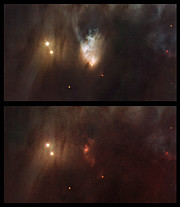