A Swarm of Ancient Stars

We know of about 150 of the rich collections of old stars called globular clusters that orbit our galaxy, the Milky Way. This sharp new image of Messier 107, captured by the Wide Field Imager on the 2.2-metre telescope at ESO’s La Silla Observatory in Chile, displays the structure of one such globular cluster in exquisite detail. Studying these stellar swarms has revealed much about the history of our galaxy and how stars evolve.

The globular cluster Messier 107, also known as NGC 6171, is a compact and ancient family of stars that lies about 21 000 light-years away. Messier 107 is a bustling metropolis: thousands of stars in globular clusters like this one are concentrated into a space that is only about twenty times the distance between our Sun and its nearest stellar neighbour, Alpha Centauri, across. A significant number of these stars have already evolved into red giants, one of the last stages of a star’s life, and have a yellowish colour in this image.

Globular clusters are among the oldest objects in the Universe. And since the stars within a globular cluster formed from the same cloud of interstellar matter at roughly the same time — typically over 10 billion years ago — they are all low-mass stars, as lightweights burn their hydrogen fuel supply much more slowly than stellar behemoths. Globular clusters formed during the earliest stages in the formation of their host galaxies and therefore studying these objects can give significant insights into how galaxies, and their component stars, evolve.

Messier 107 has undergone intensive observations, being one of the 160 stellar fields that was selected for the Pre-FLAMES Survey — a preliminary survey conducted between 1999 and 2002 using the 2.2-metre telescope at ESO’s La Silla Observatory in Chile, to find suitable stars for follow-up observations with the VLT’s spectroscopic instrument FLAMES [1]. Using FLAMES, it is possible to observe up to 130 targets at the same time, making it particularly well suited to the spectroscopic study of densely populated stellar fields, such as globular clusters.

M107 is not visible to the naked eye, but, with an apparent magnitude of about eight, it can easily be observed from a dark site with binoculars or a small telescope. The globular cluster is about 13 arcminutes across, which corresponds to about 80 light-years at its distance, and it is found in the constellation of Ophiuchus, north of the pincers of Scorpius. Roughly half of the Milky Way’s known globular clusters are actually found in the constellations of Sagittarius, Scorpius and Ophiuchus, in the general direction of the centre of the Milky Way. This is because they are all in elongated orbits around the central region and are on average most likely to be seen in this direction.

Messier 107 was discovered by Pierre Méchain in April 1782 and it was added to the list of seven Additional Messier Objects that were originally not included in the final version of Messier’s catalogue, which was published the previous year. On 12 May 1793, it was independently rediscovered by William Herschel, who was able to resolve this globular cluster into stars for the first time. But it was not until 1947 that this globular cluster finally took its place in Messier’s catalogue as M107, making it the most recent star cluster to be added to this famous list.

This image is composed from exposures taken through the blue, green and near-infrared filters by the Wide Field Camera (WFI) on the MPG/ESO 2.2-metre telescope at the La Silla Observatory in Chile. 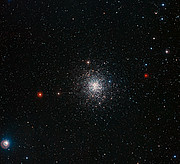 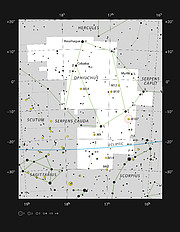 PR Video eso1048a
Zooming in on the globular star cluster Messier 107
Send us your comments!
Subscribe to receive news from ESO in your language
Accelerated by CDN77
Terms & Conditions