VISTA Reveals the Secret of the Unicorn

A new infrared image from ESO’s VISTA survey telescope reveals an extraordinary landscape of glowing tendrils of gas, dark clouds and young stars within the constellation of Monoceros (the Unicorn). This star-forming region, known as Monoceros R2, is embedded within a huge dark cloud. The region is almost completely obscured by interstellar dust when viewed in visible light, but is spectacular in the infrared.

An active stellar nursery lies hidden inside a massive dark cloud rich in molecules and dust in the constellation of Monoceros. Although it appears close in the sky to the more familiar Orion Nebula it is actually almost twice as far from Earth, at a distance of about 2700 light-years. In visible light a grouping of massive hot stars creates a beautiful collection of reflection nebulae where the bluish starlight is scattered from parts of the dark, foggy outer layers of the molecular cloud. However, most of the new-born massive stars remain hidden as the thick interstellar dust strongly absorbs their ultraviolet and visible light.

In this gorgeous infrared image taken from ESO’s Paranal Observatory in northern Chile, the Visible and Infrared Survey Telescope for Astronomy (VISTA [1], eso0949) penetrates the dark curtain of cosmic dust and reveals in astonishing detail the folds, loops and filaments sculpted from the dusty interstellar matter by intense particle winds and the radiation emitted by hot young stars.

“When I first saw this image I just said ‘Wow!’ I was amazed to see all the dust streamers so clearly around the Monoceros R2 cluster, as well as the jets from highly embedded young stellar objects. There is such a great wealth of exciting detail revealed in these VISTA images,” says Jim Emerson, of Queen Mary, University of London and leader of the VISTA consortium.

With its huge field of view, large mirror and sensitive camera, VISTA is ideal for obtaining deep, high quality infrared images of large areas of the sky, such as the Monoceros R2 region. The width of VISTA’s field of view is equivalent to about 80 light-years at this distance. Since the dust is largely transparent at infrared wavelengths, many young stars that cannot be seen in visible-light images become apparent. The most massive of these stars are less than ten million years old.

The new image was created from exposures taken in three different parts of the near-infrared spectrum. In molecular clouds like Monoceros R2, the low temperatures and relatively high densities allow molecules to form, such as hydrogen, which under certain conditions emit strongly in the near infrared. Many of the pink and red structures that appear in the VISTA image are probably the glows from molecular hydrogen in outflows from young stars.

Monoceros R2 has a dense core, no more than two light-years in extent, which is packed with very massive young stars, as well as a cluster of bright infrared sources, which are typically new-born massive stars still surrounded by dusty discs. This region lies at the centre of the image, where a much higher concentration of stars is visible on close inspection and where the prominent reddish features probably indicate emission from molecular hydrogen.

The rightmost of the bright clouds in the centre of the picture is NGC 2170, the brightest reflection nebula in this region. In visible light, the nebulae appear as bright, light blue islands in a dark ocean, while in the infrared frenetic factories are revealed in their interiors where hundreds of massive stars are coming into existence. NGC 2170 is faintly visible through a small telescope and was discovered by William Herschel from England in 1784.

Stars form in a process that typically lasts few million years and which takes place inside large clouds of interstellar gas and dust, hundreds of light-years across. Because the interstellar dust is opaque to visible light, infrared and radio observations are crucial in the understanding of the earliest stages of the stellar evolution. By mapping the southern sky systematically, VISTA will gather some 300 gigabytes per night, providing a huge amount of information on those regions that will be studied in greater detail by the Very Large Telescope (VLT), the Atacama Large Millimeter/submillimeter Array (ALMA) and, in the future, by the European Extremely Large Telescope (E-ELT).

[1] With its 4.1-metre primary mirror, VISTA is the largest survey telescope in the world and is equipped with the largest infrared camera on any telescope, with 67 million pixels. It is dedicated to sky surveys, which began early in 2010. Located on a peak next to Cerro Paranal, the home of the ESO VLT in northern Chile, VISTA shares the same exceptional observing conditions. Due to the remarkable quality of the sky in this area of the Atacama Desert, one of the driest sites on Earth, Cerro Armazones, located only 20 km away from Cerro Paranal, has been recently selected as the site for the future E-ELT. 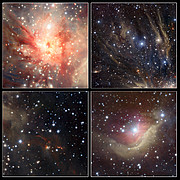 PR Image eso1039d
Star formation in the constellation of Monoceros 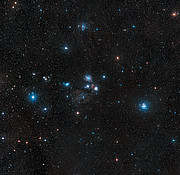 PR Video eso1039a
Zooming in on a stellar nursery in Monoceros