A European-led team of astronomers are providing hints that a recent supernova may not be as normal as initially thought. Instead, the star that exploded is now understood to have collapsed into a black hole, producing a weak jet, typical of much more violent events, the so-called gamma-ray bursts. The object, SN 2008D, is thus probably among the weakest explosions that produce very fast moving jets. This discovery represents a crucial milestone in the understanding of the most violent phenomena observed in the Universe.

These striking results, partly based on observations with ESO's Very Large Telescope, will appear tomorrow in Science Express, the online version of Science.

Stars that were at birth more massive than about 8 times the mass of our Sun end their relatively short life in a cosmic, cataclysmic firework lighting up the Universe. The outcome is the formation of the densest objects that exist, neutron stars and black holes. When exploding, some of the most massive stars emit a short cry of agony, in the form of a burst of very energetic light, X- or gamma-rays.

In the early afternoon (in Europe) of 9 January 2008, the NASA/STFC/ASI Swift telescope discovered serendipitously a 5-minute long burst of X-rays coming from within the spiral galaxy NGC 2770, located 90 million light-years away towards the Lynx constellation. The Swift satellite was studying a supernova that had exploded the previous year in the same galaxy, but the burst of X-rays came from another location, and was soon shown to arise from a different supernova, named SN 2008D.

"What made this event very interesting," says Mazzali, "is that the X-ray signal was very weak and 'soft' [1], very different from a gamma-ray burst and more in line with what is expected from a normal supernova."

So, after the supernova was discovered, the team rapidly observed it from the Asiago Observatory in Northern Italy and established that it was a Type Ic supernova.

"These are supernovae produced by stars that have lost their hydrogen and helium-rich outermost layers before exploding, and are the only type of supernovae which are associated with (long) gamma-ray bursts," explains Mazzali. "The object thus became even more interesting!"

Earlier this year, an independent team of astronomers reported in the journal Nature that SN 2008D is a rather normal supernova. The fact that X-rays were detected was, they said, because for the first time, astronomers were lucky enough to catch the star in the act of exploding.

Mazzali and his team think otherwise. "Our observations and modeling show this to be a rather unusual event, to be better understood in terms of an object lying at the boundary between normal supernovae and gamma-ray bursts."

The team set up an observational campaign to monitor the evolution of the supernova using both ESO and national telescopes, collecting a large quantity of data. The early behaviour of the supernova indicated that it was a highly energetic event, although not quite as powerful as a gamma-ray burst. After a few days, however, the spectra of the supernova began to change. In particular Helium lines appeared, showing that the progenitor star was not stripped as deeply as supernovae associated with gamma-ray bursts.

Over the years, Mazzali and his group have developed theoretical models to analyse the properties of supernovae. When applied to SN2008D, their models indicated that the progenitor star was at birth as massive as 30 times the Sun, but had lost so much mass that at the time of the explosion the star had a mass of only 8-10 solar masses. The likely result of the collapse of such a massive star is a black hole.

"Since the masses and energies involved are smaller than in every known gamma-ray burst related supernova, we think that the collapse of the star gave rise to a weak jet, and that the presence of the Helium layer made it even more difficult for the jet to remain collimated, so that when it emerged from the stellar surface the signal was weak," says Massimo Della Valle, co-author.

"As our X-ray and gamma-ray instruments become more advanced, we are slowly uncovering the very diverse properties of stellar explosions," explains Guido Chincarini, co-author and the Principal Investigator of the Italian research on gamma-ray bursts. "The bright gamma-ray bursts were the easiest to discover, and now we are seeing variations on a theme that link these special events to more normal ones."

These are however very important discoveries, as they continue to paint a picture of how massive star end their lives, producing dense objects, and injecting new chemical elements back into the gas from which new stars will be formed.

The metamorphosis of Supernova SN 2008D/XRF 080109: a link between Supernovae and GRBs/Hypernovae, by Paolo Mazzali et al., Science Express, 24 July 2008.

[1] Astronomers classify X-rays as soft when the relative amount of high-energy X-rays is smaller than that of lower-energy ones. 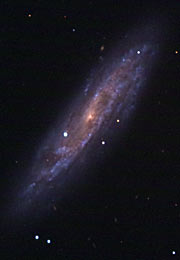 PR Image eso0823c
The quiet explosion
Send us your comments!
Subscribe to receive news from ESO in your language
Accelerated by CDN77
Terms & Conditions