Using the newly installed AMBER instrument on ESO's Very Large Telescope Interferometer, which combines the light from two or three 8.2-m Unit Telescopes thereby amounting to observe with a telescope of 40 to 90 metres in diameter, two international teams of astronomers observed with unprecedented detail the environment of two stars. One is a young, still-forming star and the new results provide useful information on the conditions leading to the creation of planets. The other is on the contrary a star entering the latest stages of its life. The astronomers found, in both cases, evidence for a surrounding disc.

A first group of astronomers [1], led by Fabien Malbet from the Laboratoire d'Astrophysique de Grenoble, France, studied the young 10-solar mass stellar object MWC 297, which is still in the very early stage of its life [2].

"This scientific breakthrough opens the doors to an especially detailed scrutiny of the very close environment of young stars and will bring us invaluable knowledge on how planets form", says Malbet.

It is amazing to see the amount of details the astronomers could achieve while observing an object located more than 800 light-years away and hidden by a large amount of gas and dust. They found the object to be surrounded by a proto-planetary disc extending to about the size of our Solar System, but truncated in his inner part until about half the distance between the Earth and the Sun. Moreover, the scientists found the object to be surrounded by an outflowing wind, the velocity of which increased by a factor 9, from about 70 km/s near the disc to 600 km/s in the polar regions [3].

"The reason why the inner part of the disc should be truncated is not clear", adds Malbet. "This raises new questions on the physics of the environment of intermediate mass young stars."

The astronomers now plan to perform observations with AMBER [4] with three telescopes to measure departure from symmetry of the material around MWC 297.

Another international team of astronomers [5] has just done this kind of observations to study the surroundings of a star entering the last stages of its life. In a world premiere, they combined with AMBER the light of three 8.2-m Unit Telescopes of the VLT, gaining unsurpassed knowledge on a B[e] supergiant, a star that is more luminous than our Sun by more than a factor 10,000. This supergiant star is located ten times further away than MCW 297 at more than 8,000 light-years.

The astronomers made the observations to investigate the crucial questions concerning the origin, geometry, and physical structure of the envelope surrounding the star.

These unique observations have allowed the scientists to see structures on scale as small as 1.8 thousandths of an arcsecond - that is the same as distinguishing between the headlights of a car from about 230,000 km away, or slightly less than 2/3 of the distance from the Earth to the Moon!

Armando Domiciano de Souza, from the MPI für Radioastronomie in Bonn (Germany) and his colleagues made also use of the MIDI instrument on the VLTI [6], using two Unit Telescopes. Using their full dataset, they found the circumstellar envelope around the supergiant to be non-spherical, most probably because the star is also surrounded by an equatorial disc made of hot dust and a strong polar wind.

"These observations are really opening the doors for a new era of understanding of these complex and intriguing objects", says Domiciano de Souza.

"Such results could be achieved only due to the spectral resolution as well as spatial resolution that AMBER offers. There isn't any similar instrument in the world," concludes Fabien Malbet, who is also the AMBER Project Scientist.

[2]: If the lifetime of the Sun were scaled to that of a human, the Sun would be starting his forties, whereas the star MWC 297 would just be a 1-3 day old newborn. The B[e] supergiant on the other hand would be almost 80 years old.

[3]: MWC 297 was observed during the second night of the first commissioning run of the AMBER instrument on the Kueyen-Melipal (47m) baseline of the VLTI. Additional observations were made using the ISAAC near-infrared spectrograph attached to Antu.

[4]: The Astronomical Multiple BEam Recombiner (AMBER) is a near-infrared, multi-beam interferometric instrument, combining simultaneously 3 telescopes. It was built in collaboration with ESO by a consortium of French, German and Italian institutes. It is offered to the users since October 2005. For more information, see the AMBER homepage.

[6]: MIDI is the mid-infrared (8 to 13 microns) instrument of the VLT interferometer. It combines two beams (either from the 8.2-m Unit Telescopes or from the 1.8-m Auxiliary Telescopes).

The results presented in this press release are described in two papers to be published in the leading research journal, Astronomy and Astrophysics and are available, as PDF file, from the publisher web site: "Disk and wind interaction in the young stellar object MWC 297 spatially resolved with VLT/AMBER" by F. Malbet et al., "VLTI/AMBER and VLTI/MIDI spectro-interferometric observations of the B[e] supergiant CPD -57o 2874" by A. Domiciano de Souza et al.

Press releases on the MCW 297 results are also published in French by the CNRS, in Italian by INAF, and in German by the Max-Planck Institute. 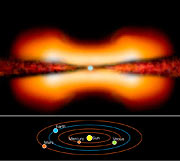 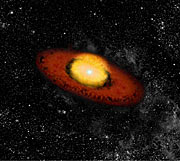