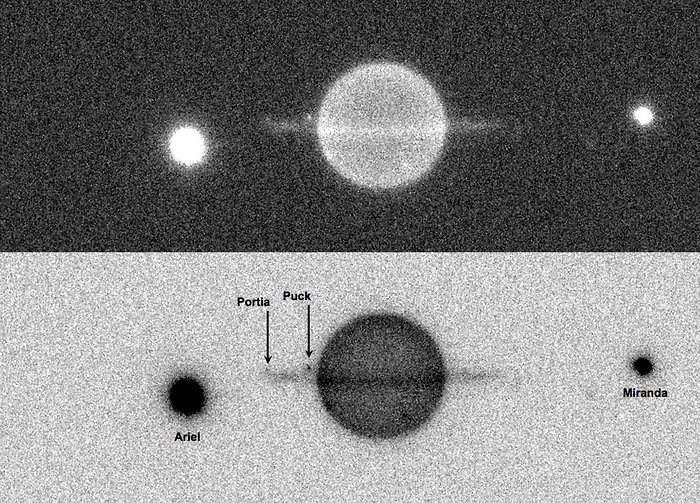 An image of the planet Uranus (located 20 Astronomical units from Earth) obtained at the Very Large Telescope Observatory using the Adaptive Optics system NAOS and the near-infrared imager CONICA to capture high-contrast images of the giant planet and its system of satellites and rings during its 2008 equinox.

Every 42 years, the ring (and satellites) plane of Uranus crosses the Sun, providing us with a unique opportunity to observe the rings while they present their edge to us. Ring plane crossing also allow us to observe the rings form their dark side (i.e. while the Sun is illuminating them from the opposite side), so one can search for faint satellites, faint rings, or faint ring structures, which could not be seen otherwise. Ring Plane Crossings are also an excellent opportunity to observe mutual events between satellites such as eclipse or occultation phenomena.

The image above corresponds to a one minute exposure (maximum permitted time to prevent trailing of the moving satellites) obtained at 2.2 micron with a K band filter. The bandpass of this filter matches the absorption bands of methane, which is present in the atmosphere of Uranus, and has the effect of making the bright planet (almost) completely disappear from our images. Thanks to this observing trick, we can observe the faint rings and small satellites of Uranus, which would become invisible otherwise, lost in the glare of the planet. The bright spots on each side of Uranus are Miranda (~470km diam.) and Ariel (~1100km diam.), respectively to the right and left of the image. Two much smaller satellites can be seen just above the ring plane, to the left of the planet, the closer to Uranus being Puck (~150km diam.) and the other Portia (~100km), near the ring tip in this image.

A movie of these observations is also available. The movie shows an animation of this system of satellites over a two hour period. You can easily see the impact of fluctuating seeing conditions on the image quality. Under good seeing, both small satellites Puck and Portia becomes clearly visible when they move along their orbital path, while the images start to blur when the seeing conditions degrade.