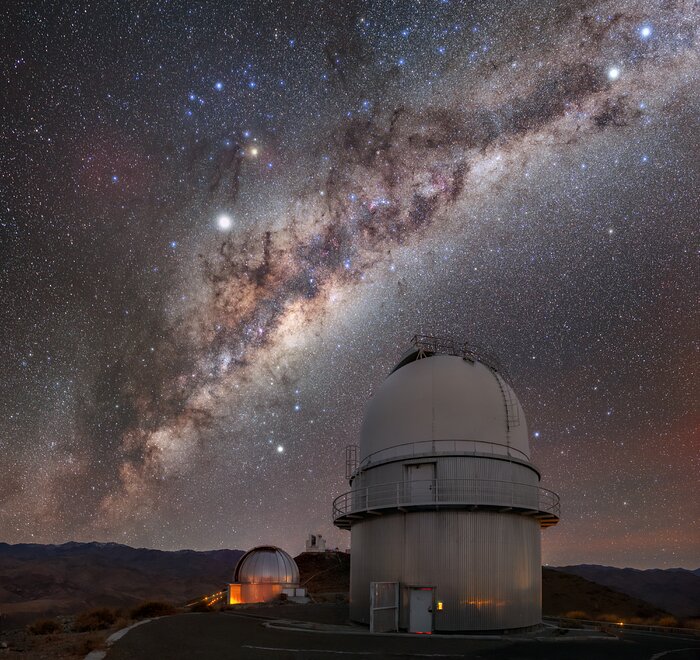 Beneath this breathtaking splatter of stars, the road to ESO’s La Silla Observatory in the Chilean Atacama Desert is home to a rich variety of telescopes. In the foreground we can see the Danish 1.54-metre telescope, followed by the MPG/ESO 2.2-metre telescope and ESO’s New Technology Telescope (NTT)  in the background.

The Danish 1.45-metre telescope is performing its nightly duties, seeking to unveil some of the mysteries of the cosmos. It has provided a plethora of scientific discoveries, such as observing the afterglows of short gamma-ray bursts, likely caused by the catastrophic collision of two neutron stars.

The MPG/ESO 2.2-metre telescope is also an avid chaser of gamma-ray bursts: its GROND instrument looks for the afterglows of these events, which are then followed up by larger telescopes. The telescope also hosts a spectrograph and a wide field imager that has captured stunning images.

Although it may be just a speck in this image, the NTT is responsible for some key advances in observational astronomy. Large telescope mirrors bend under their own weight, so they have to be adjusted to preserve optimal image quality and detail. The NTT was the first telescope where these adjustments were done on the fly during observations, by monitoring a reference star. This technique, called active optics, is now widely used in large professional telescopes.