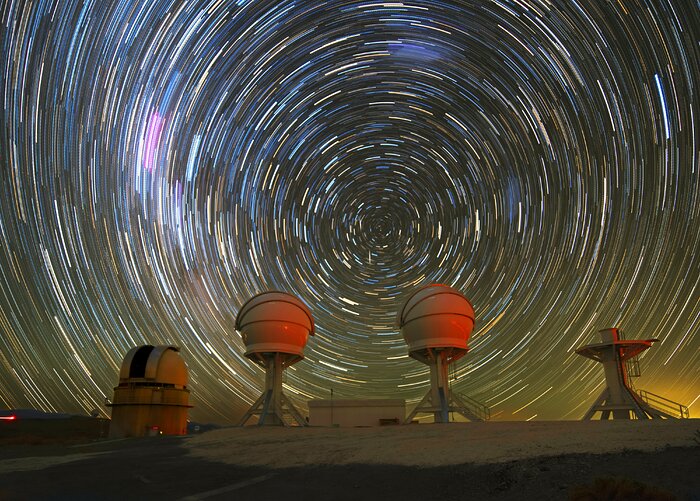 This striking star trail image was captured above ESO’s La Silla Observatory, in Chile’s Atacama desert. Star trails are caused by Earth’s rotation; in this long exposure image, stars appear to circle around the south celestial pole. Almost unrecognisable are the Carina Nebula (bright magenta smudge, centre-left) and the Large and Small Magellanic Clouds (blue smudges in the centre-top and centre-right, respectively).

Gazing up into the starry vortex are two of the three BlackGEM telescopes, built and operated by Radboud University, the Netherlands Research School for Astronomy (NOVA), and KU Leuven.The third telescope on the right was still under construction at the time this photograph was taken, having only a platform and no dome. BlackGEM eventually aims to expand to 15 telescopes, capable of performing extensive surveys of the night sky.

BlackGEM will join detectors such as LIGO and Virgo in the search for the most dramatic events in space, such as merging black holes and neutron stars. Following the detection of gravitational waves from these collisions by LIGO and Virgo, BlackGEM will scan large areas of the sky looking for the visible light emitted in these events. Other facilities like ESO’s Very Large Telescope will then follow up on BlackGEM’s measurements, enabling astronomers to better understand some of our universe’s most elusive phenomena.