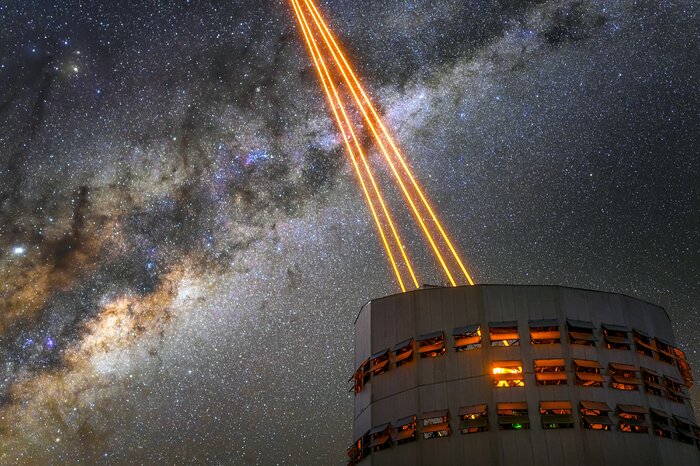 Powerful laser beams leave Unit Telescope 4 at ESO’s Very Large Telescope (VLT), located in the Atacama Desert in Chile. Their destination? An upper layer of the Earth’s atmosphere, about 90 kilometres from the ground, rich in sodium atoms.

The colour of the lasers is tuned to excite these atoms, making them shine brightly, like stars. Astronomers then use these artificial stars to calculate the blurring effect that Earth’s turbulent atmosphere creates on the light from astronomical objects. A deformable mirror uses this information to correct this blur in real time with a technique known as adaptive optics, which leads to much sharper observations.

This telescope, also known as Yepun, is the only one at the VLT equipped with a Laser Guide Star Facility. Each beam is 30 centimetres wide and packs 22 watts of power. For safety reasons, the system is equipped with cameras monitoring the part of the sky occupied by the lasers, so that when an airplane flying by is detected approaching this area, the lasers are promptly switched off.