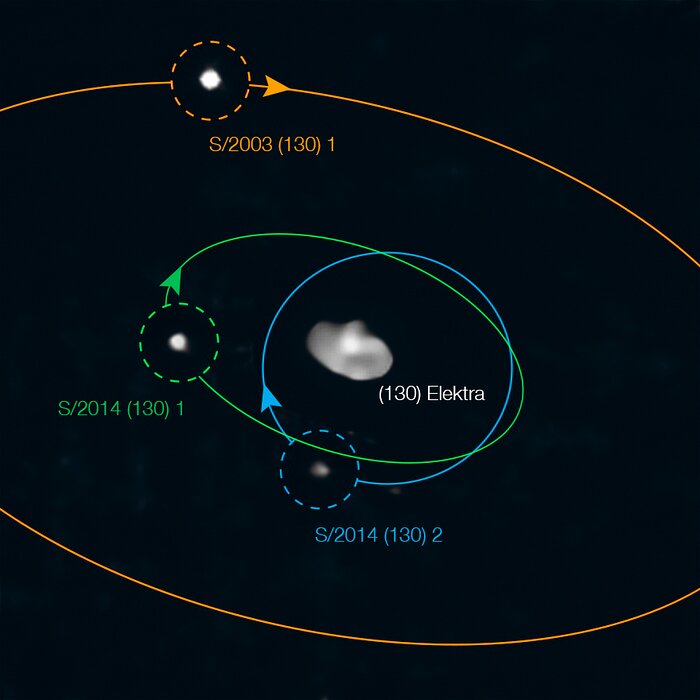 Between Mars and Jupiter lie some of the relics of the early Solar System: the main asteroid belt. This belt is full of unusual asteroids whose origins reveal the building blocks of the early terrestrial planets. Of these, one of the more intriguing is Elektra, imaged here using the instrument SPHERE, installed on ESO’s Very Large Telescope at Paranal, Chile.

Previously, Elektra was known to have not one but two moons orbiting it, shown by the orange and green orbits respectively. But now a team of astronomers, led by Anthony Berdeu, from the National Astronomical Research Institute of Thailand, have found a new satellite orbiting the asteroid — shown with the blue orbit. This discovery makes Elektra the first ever quadruple asteroid system.

This new, third moonlet of Elektra, provisionally named S/2014 (130) 2, lies closer to its parent asteroid than the other moons, at an average distance just under 350 km, and is 15000 times fainter than Elektra. The team used public data from the ESO science archive and a new processing technique to reveal this small moon. The discovery will help astronomers understand how these satellites form and, in turn, provides crucial information about planetary formation and evolution of our own solar system.

SPHERE, the Spectro-Polarimetric High-contrast Exoplanet REsearch instrument, is a powerful planet-finding instrument. It uses an extreme adaptive optics system which allows for real time corrections of turbulence in the Earth’s atmosphere which causes stars to twinkle. It was only with SPHERE’s sensitivity and spatial resolution, coupled with cutting-edge data processing techniques, that the team was able to spot Elektra’s newest satellite.