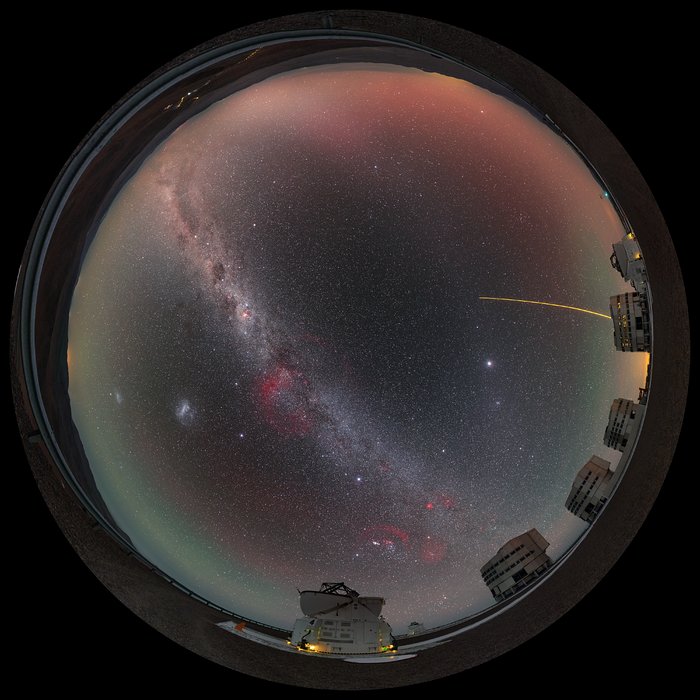 This fulldome view of the Very Large Telescope (VLT), at ESO’s Paranal Observatory, shows almost all of the telescope’s constituent units in one family photograph!

ESO's VLT comprises four large 8.2-metre Unit Telescopes (UTs), all of which can be seen here and are recognised by their boxy appearance, and four 1.8-metre Auxiliary Telescopes (ATs), two of which are seen here flanking their bigger relatives (both with their rounded domes open). Alongside their standard designations — UT1, UT2, and so on — each of the four giant UTs has its own name in the local Chilean Mapuche language: Antu (The Sun), Kueyen (The Moon), Melipal (The Southern Cross), and Yepun (Venus).

The yellow laser streaking up into the night sky, launched by one of the UTs, creates an artificial star high in the atmosphere, fittingly known as a Laser Guide Star (LGS). This ‘star’ is part of the telescope’s adaptive optics system, which allows astronomers to compensate for the effects of atmospheric turbulence and achieve far clearer images.

The image was created by ESO Photo Ambassador Petr Horálek, and is a puzzle made up of numerous different pictures stitched together to form this high resolution panorama.