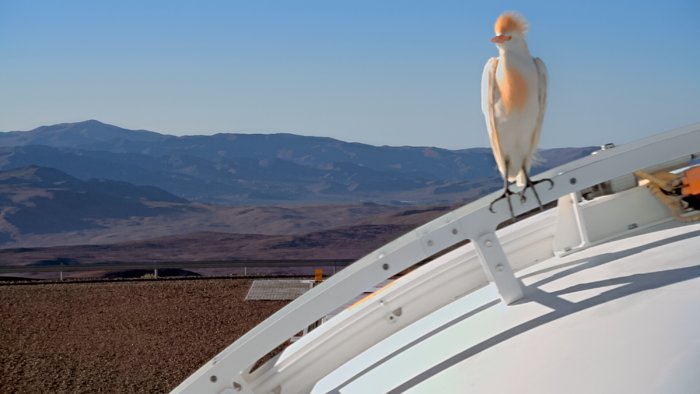 ESO’s new webcams are being enjoyed by people across the world — and it seems the local wildlife can’t resist taking a peek either. One of the cameras at Paranal Observatory in Chile recently played host to a cattle egret (a type of heron), which chose to settle on the enclosure of one of the Auxiliary Telescopes (ATs) comprising ESO’s Very Large Telescope (VLT) Observatory. Thankfully the AT was dormant, waiting for nightfall to begin observing.

The webcams from Apical, which began a 24/7 livestream of the workings of Paranal in late 2016, offer razor-sharp images of the observatory and its surroundings in the serene Atacama Desert. The extreme altitude and arid climate mean that distant mountains can be seen hundreds of kilometres away, while the crystal clear skies create stunning 360-degree panoramic webcam views day and night.

It seems the heron was happy with the webcams at Paranal — it stayed on the AT for over an hour and a half, preening itself and its distinctive shock of hair in preparation for the perfect selfie! The webcam itself is white and its shape is not unlike that of a cattle egret. Perhaps it was looking for a mate?