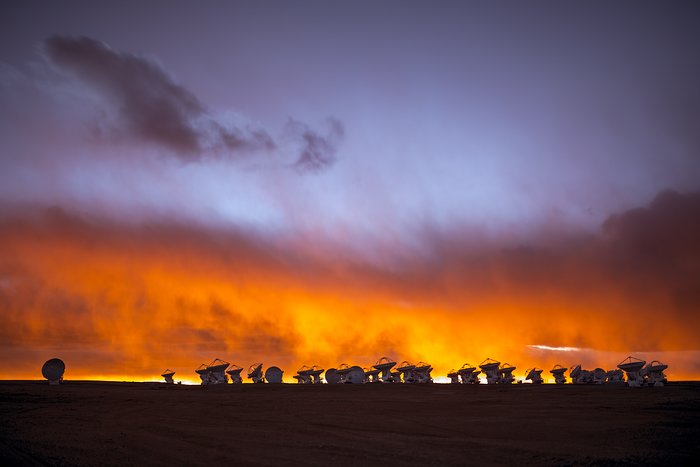 The skies over the Chilean Andes are never boring — not even when a soufflé, billow, flock, scud, or cover of clouds pays a rare visit! This image of the plateau at Chajnantor, 5000 metres above sea level, and home to the 66 antennas comprising the ALMA Observatory, shows strong winds and thick cloud approaching at sunset, resulting in an amazingly dramatic and fiery scene.

ALMA is the Atacama Large Millimeter/submillimeter Array, a state-of-the-art observatory that studies a completely different kind of cloud to those captured here. Astronomers use ALMA to study molecular clouds, vast accumulations of gas and dust, at temperatures only a few tens of degrees above absolute zero. Often these star-forming regions are dark and obscured in visible light, but they shine brightly in the millimetre and submillimetre parts of the spectrum.

This moment was captured by ESO Photo Ambassador Babak Tafreshi while he was participating in the ESO 2016 Fulldome Expedition. The expedition gathered spectacular images for the ESO Supernova Planetarium & Visitor Centre.