Squaring up to the sky 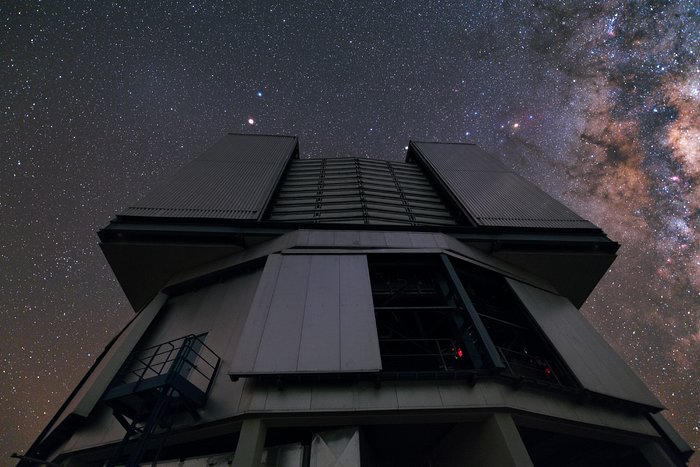 Illuminated only by the impressive nighttime sky, one of ESO’s Very Large Telescope (VLT) Unit Telescopes is an imposing feature in this Picture of the Week.

The VLT is one of the largest and most sophisticated astronomical installations in the world. It consists of four identical Unit Telescopes, each with a main mirror of 8.2 metres in diameter. While each is a large telescope in its own right, by combining the light from all telescopes on the platform — a configuration known as an interferometer — the array in its longest baseline can resolve celestial objects 25 times finer than is possible by using one of the telescopes on its own.

The VLT is situated 2635 metres above sea level in Chile’s Atacama Desert, where the amount of water vapour in the atmosphere is low enough to permit the VLT to observe infrared, as well as visible, light. The spectacular observing conditions at the site are illustrated by the magnificent display of stars in this image. The Milky Way traces a colourful path across the top right of the image, where the dust lanes and star-forming regions of our home galaxy are clearly visible.