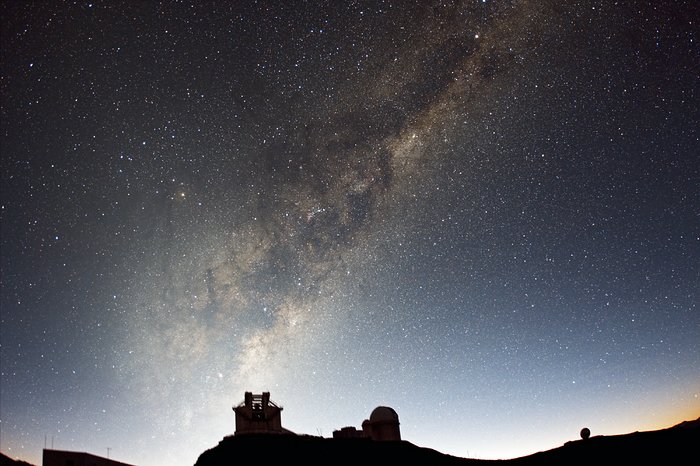 Here we see ESO's La Silla Observatory with a backdrop of the Milky Way. Established in the 1960s, La Silla was ESO's first observatory to be built in Chile.

Visible on the hill in the centre of this image is the rectangular New Technology Telescope (NTT) on the left, and the domed ESO 3.6-metre telescope to the right. The 3.58-metre NTT was inaugurated in 1989, and was the first in the world to have a computer-controlled main mirror. The main mirror is flexible, and its shape is actively adjusted during observations to preserve the optimal image quality. This technology, known as active optics, is now applied to all major modern telescopes — including the Very Large Telescope at Cerro Paranal, and the future European Extremely Large Telescope.

La Silla is home to several other telescopes, including the Swedish–ESO Submillimetre Telescope (SEST), and the robotic TAROT, which is used to monitor rapidly occurring events such as gamma-ray bursts.

This picture was taken by ESO Photo Ambassador José Joaquín Pérez. When José is not taking stunning photos of the night sky, he works as an agricultural engineer where he devotes his time to the protection of crops in central Chile.