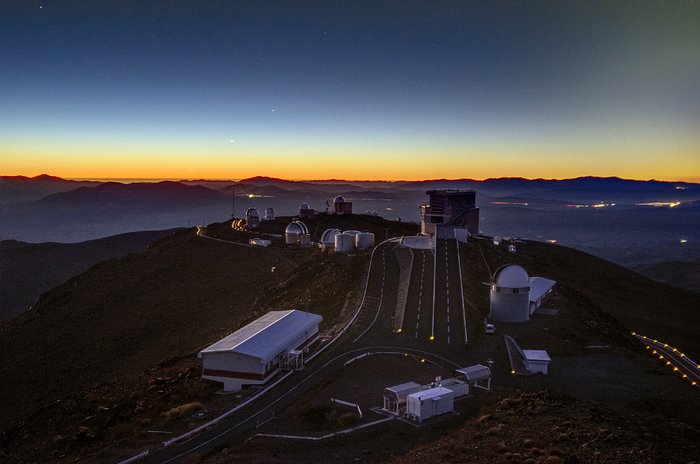 The Sun sets over La Silla, one of ESO's observing sites in Chile, creating a fiery orange glow along the horizon.

This image, taken by David Jones, shows the alignment of three planets over the summit of ESO's telescopes in June 2013. Here the trio visible to the left of centre is composed of Jupiter (bottom left, almost invisible in orange sunset), Venus (centre), and Mercury (top right) — see labelled image.

Alignments like this happen only once every several years, so it is a real treat for photographers and astronomers. When three (or more) celestial objects align like this in the sky, it is called a "syzygy". Check this syzygy image, showing almost the same scene (also from May 2013).

"This image was taken during a five-night observing run with the 3.6-metre New Technology Telescope on La Silla, so I was very fortunate to be awarded observing time at just the right time to take the picture," adds photographer Dave Jones. "The close clustering of the three planets only lasted a week or so, and the next time something like this will come around will be 2026, so it’s a very lucky snap indeed!"

Based at one of the driest places on Earth on the outskirts of the Atacama Desert in Chile, atmospheric conditions are so stable here they provide crystal-clear views of our night sky. This image is actually a blend of two photos of different exposure lengths, producing a detailed view of the observing site as the Sun begins to set.