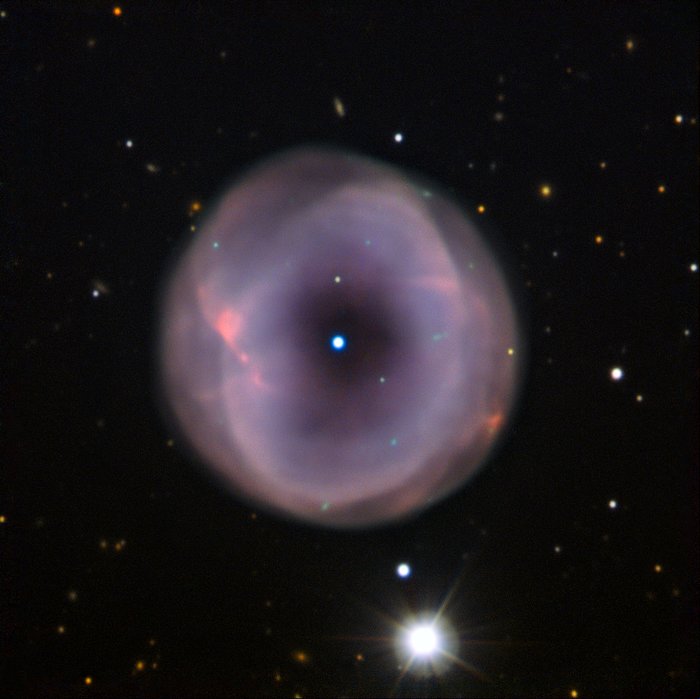 IC 5148 is a beautiful planetary nebula located some 3000 light-years away in the constellation of Grus (The Crane). The nebula has a diameter of a couple of light-years, and it is still growing at over 50 kilometres per second — one of the fastest expanding planetary nebulae known. The term “planetary nebula” arose in the 19th century, when the first observations of such objects — through the small telescopes available at the time — looked somewhat like giant planets. However, the true nature of planetary nebulae is quite different.

When a star with a mass similar to or a few times more than that of our Sun approaches the end of its life, its outer layers are thrown off into space. The expanding gas is illuminated by the hot remaining core of the star at the centre, forming the planetary nebula, which often takes on a beautiful, glowing shape.

When observed with a smaller amateur telescope, this particular planetary nebula shows up as a ring of material, with the star — which will cool to become a white dwarf — shining in the middle of the central hole. This appearance led astronomers to nickname IC 5148 the Spare Tyre Nebula.

The ESO Faint Object Spectrograph and Camera (EFOSC2) on the New Technology Telescope at La Silla gives a somewhat more elegant view of this object. Rather than looking like a spare tyre, the nebula resembles ethereal blossom with layered petals.