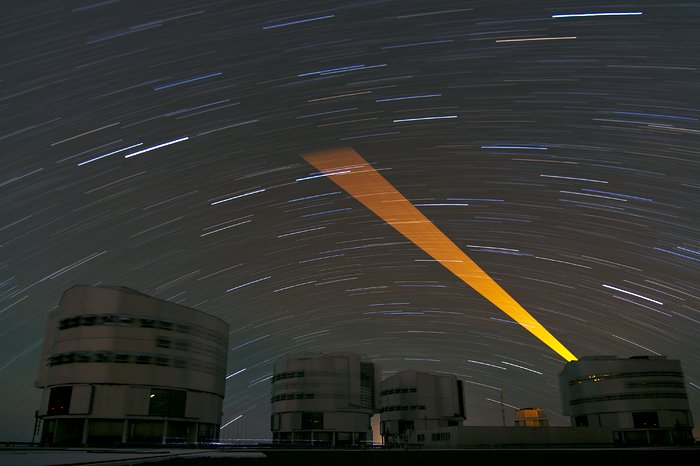 A powerful laser beam from ESO’s Very Large Telescope (VLT) paints the night sky over the Chilean Atacama Desert in this stunning image taken by Julien Girard. The Earth’s rotation during the 30-minute exposure — and the movement of the laser as it compensated for this — is why the beam appears to fan out. This is also why the stars are stretched into curved trails, revealing subtle differences in their colours.

The laser is used to create a point of light — an artificial star — by making sodium atoms 90 kilometres up in the Earth’s atmosphere glow. Measurements of this so-called guide star are used to correct for the blurring effect of the atmosphere in astronomical observations — a technique known as adaptive optics. While sufficiently bright natural stars are also used for adaptive optics, a laser guide star can be positioned wherever it is needed, meaning that adaptive optics can be used for targets across more of the sky.

The four large enclosures of the VLT’s 8.2-metre Unit Telescopes are visible in the photograph, with the smaller VLT Survey Telescope (VST) in the background. Julien is an ESO astronomer based in Chile, who works at the VLT. On the night this photo was taken, he was supporting observations on the rightmost Unit Telescope, and took the opportunity to set up his camera on a fixed tripod before returning to the control building to make the observations.

The movements of the telescope enclosures during the long exposure also appear as a blur, while faint trails of light, made by people walking across the platform between the telescopes, can also be seen.

Julien submitted this photograph to the Your ESO Pictures Flickr group. The Flickr group is regularly reviewed and the best photos are selected to be featured in our popular Picture of the Week series, or in our gallery. In 2012, as part of ESO’s 50th anniversary year, we are also welcoming your historical ESO-related images.