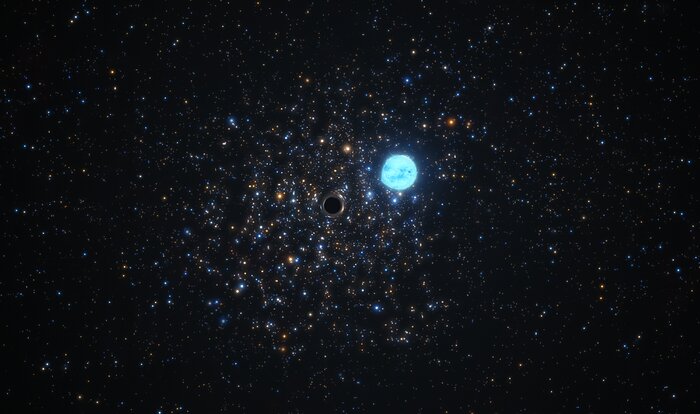 This artist’s impression shows a compact black hole 11 times as massive as the Sun and the five-solar-mass star orbiting it. The two objects are located in NGC 1850, a cluster of thousands of stars roughly 160 000 light-years away in the Large Magellanic Cloud, a Milky Way neighbour. The distortion of the star’s shape is due to the strong gravitational force exerted by the black hole.

Not only does the black hole’s gravitational force distort the shape of the star, but it also influences its orbit. By looking at these subtle orbital effects, a team of astronomers were able to infer the presence of the black hole, making it the first small black hole outside of our galaxy to be found this way. For this discovery, the team used the Multi Unit Spectroscopic Explorer (MUSE) instrument at ESO’s Very Large Telescope in Chile.