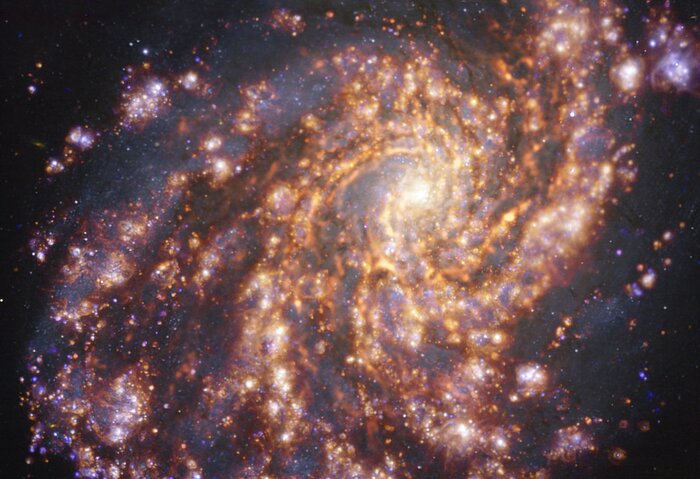 This image of the nearby galaxy NGC 4254 was obtained by combining observations taken with the Multi-Unit Spectroscopic Explorer (MUSE) on ESO’s Very Large Telescope (VLT) and with the Atacama Large Millimeter/submillimeter Array (ALMA), in which ESO is a partner. NGC 4254 is a grand-design spiral galaxy located approximately 45 million light-years from Earth in the constellation Coma Berenices. The image is a combination of observations conducted at different wavelengths of light to map stellar populations and gas. ALMA’s observations are represented in brownish-orange tones and highlight the clouds of cold molecular gas that provide the raw material from which stars form. The MUSE data show up mainly in gold and blue. The bright golden glows map warm clouds of mainly ionised hydrogen, oxygen and sulphur gas, marking the presence of newly born stars, while the bluish regions reveal the distribution of slightly older stars.