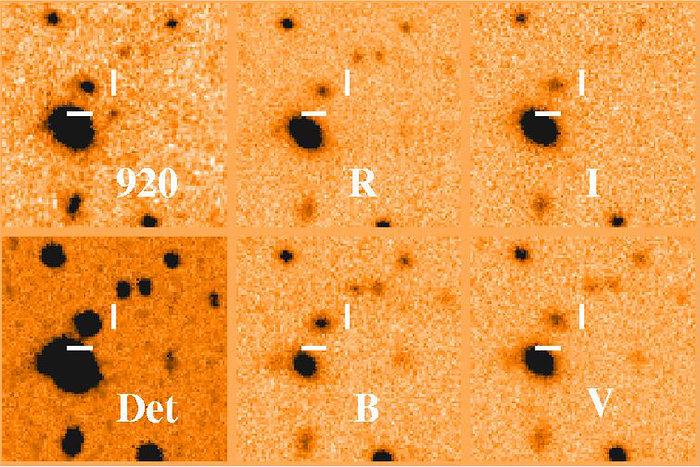 Image of a particular object (at the center), as seen at various wavelengths (colours) on CCD-frames obtained through different optical filters with the CFH12K camera at the CFHT (Canada-France-Hawaii telescope at Mauna Kea (Hawaii, USA)). The object is only visible in the NB920 frame in which emission at the near-infrared wavelength 920 nm is registered (upper left). It is not seen in any of the others (Blue [450 nm], Visual [550 nm], Red [650 nm], Infrared [800 nm]), nor in a combination of these (the "sum" of BVRI, the so-called "detection" image, here labeled as "Det"; it is used to detect closer objects from their optical colours for spectroscopic follow-up observations). The indicated object was later shown to be an extremely distant galaxy and has been designated z6VDF J022803-041618. Each of the six photos covers 20 x 20 square arcsec; North is up, East is right.