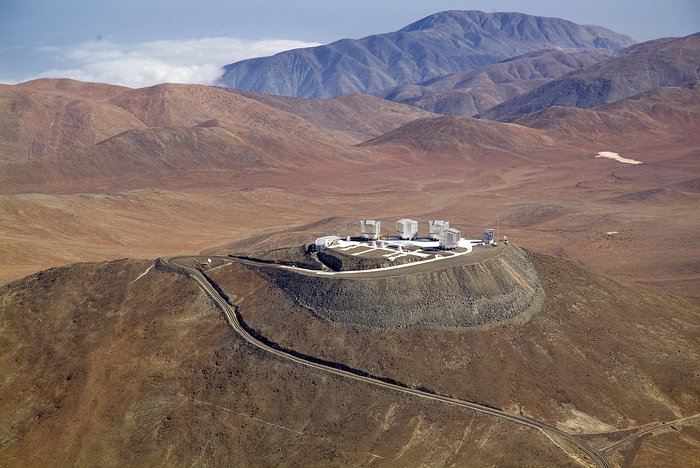 A spectacular aerial view of the ESO Very Large Telescope (VLT) platform, atop Cerro Paranal, in the Chilean Atacama Desert. The VLT consists of an array of four giant 8.2-metre Unit Telescopes (UTs), that can observe together or individually, and four 1.8-metre Auxiliary Telescopes (ATs) dedicated to interferometry. UTs and ATs are visible in the picture. On the right side of the platform is the 2.6-metre VLT Survey Telescope (VST), while on the left edge the Control Building, where astronomers operate the telescopes during the night, is partially visible. The Paranal Observatory is located at 2600 metres altitude, in the Taltal district, some 120 km south of Antofagasta, in the II Region of Chile. In the background, at the upper edge of the image, is the Pacific Ocean, only 12 km west from the observatory and typically covered by clouds. This is due to the fact that the cold oceanic stream keeps the thermal inversion layer very low, guaranteeing exceptional conditions for ground-based astronomy.