ESO’s fifth Director General, Riccardo Giacconi, passed away on Sunday 9 December 2018 at the age of 87.

Riccardo Giacconi led ESO from 1993 to 1999, at a crucial time in the organisation’s history. ESO was constructing what is now its flagship facility, the Very Large Telescope (VLT), on Cerro Paranal, and starting the partnership that would become the Atacama Large Millimeter/submillimeter Array (ALMA). The successes of these years, and in particular the construction of the VLT, put ESO on the path to being the world-leading astronomical organisation that it is today.

Riccardo Giacconi was born in Genova, Italy on 6 October 1931. He obtained both a degree in Physics and his PhD from the University of Milan. In 1956, two years after receiving his PhD, Giacconi moved to Indiana University, USA and then on to Princeton University, USA to work at the Princeton Cosmic Ray Laboratory.

Following his time at Princeton, Giacconi began the work that earned him the title of “father of X-ray astronomy”. He was contracted by American Science and Engineering to initiate a space science programme, and Giacconi decided that the programme should focus on observations at X-ray wavelengths. This decision effectively marked the beginning of X-ray astronomy. In 1962, he and his group discovered Scorpius X-1, the first known X-ray source outside the Solar System, and the cosmic X-ray background.

“As an X-ray astronomer myself, Riccardo Giacconi and his work illuminated more than three decades of my career, long before I came to ESO,” commented Xavier Barcons, ESO’s current Director General. “I consider it a great honour to be one of his successors as Director General, at the organisation that he did so much to shape,”

During Giacconi’s time as ESO’s Director General he made significant changes to the organisation of ESO which were instrumental in making the VLT a success. In particular, his modern management techniques were well-suited to large programmes, and fostered greater collaboration between ESO and Chile. Thanks to his leadership, ESO was able to overcome significant technological and financial difficulties in building the VLT, and two of the four Unit Telescopes saw first light toward the end of his term.

During his tenure as Director General, he also oversaw further developments at La Silla — through his support, the New Technology Telescope (NTT) was improved. The NTT broke new ground for telescope engineering and design and was the first in the world to have a computer-controlled main mirror.

Upon leaving ESO, he returned to the United States to take up a post as President of Associated Universities Incorporated (AUI) in 2002. He was awarded a share of the Nobel Prize in Physics in 2002 “for pioneering contributions to astrophysics, which have led to the discovery of cosmic X-ray sources.”

Riccardo Giacconi’s contributions as Director General helped shape ESO into the world-leading organisation it has become, and his leadership will be remembered as instrumental for ESO’s enduring success.

A fuller obituary has been published in ESO's quarterly journal The Messenger. 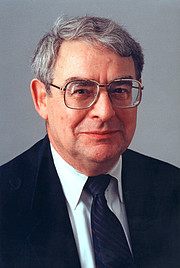