Discover your Place in Space at the ESO Supernova

From 17 May to 2 September 2018, the ESO Supernova Planetarium & Visitor Centre will display it’s first temporary exhibition — Our Place in Space. This small free-of-charge showcase of art and science is inspired by the  spectacular images of  the NASA/ESA Hubble Space Telescope and encourages visitors to consider where humanity fits into the grand scheme of the Universe. Works from eleven Italian artists  are presented to provide a unique view of the Universe and our place within it.

For more than 28 years, the NASA/ESA Hubble Space Telescope has been expanding our cosmic horizons. It is one of the most ambitious and successful astronomy missions ever flown in space and is a great example of a successful international partnership. Not only has this magnificent telescope revealed and shared the beauty, wonder, and complexity of the Universe, but it has also brought astronomy to the public eye, greatly impacting our culture, society and art.

Hubble’s images have been inspiring artists all over the world for over two decades. They have provided a stunning pictorial backdrop to the deep existential questions that we all share: where do we come from? where we are going? are we alone? These are questions that are of great interest to professional astronomers but also have deep meaning for each one of us.

Originally designed by Antonella Nota (ESA), and Anna Caterina Bellati (Bellati Ed.), and sponsored by the European Space Agency in collaboration with STScI, the objective of Our Place in Space is to ponder humanity’s place in the Universe. Astronomers and artists present their own interpretations of where we are, where we belong, what our past might have been and how our future might look. The ESO version of the exhibition taps into the imagination of 11 artists who have produced pieces inspired by Hubble. The artworks range from alabaster-sculpted nebulae to planetary spheres encrusted with glass mosaics to a spacecraft built from recycled wood, plastic, and toys. This fusion of science and art showcases the impact that Hubble has made on culture and society.

From February to April 2017, Our Place in Space premiered in the Istituto Veneto di Scienze, Lettere ed Arti in Venice, Italy. In summer 2017, it was on display in Chiavenna, Italy. And from today until 2 September 2018, it will be exhibited at the ESO Supernova. This location was chosen partly to honour the longstanding and fruitful cooperation between the European Space Agency and the European Southern Observatory.

The ESO Supernova Planetarium & Visitor Centre opened its doors to the public on 28 April 2018. To see the full range of activities on offer and to book a place at any events, please use the following link. Entrance to the entire centre, including Our Place in Space, is free of charge in 2018.

ESO is the foremost intergovernmental astronomy organisation in Europe and the world’s most productive ground-based astronomical observatory by far. It has 15 Member States: Austria, Belgium, the Czech Republic, Denmark, France, Finland, Germany, Italy, the Netherlands, Poland, Portugal, Spain, Sweden, Switzerland and the United Kingdom, along with the host state of Chile and with Australia as a strategic partner. ESO carries out an ambitious programme focused on the design, construction and operation of powerful ground-based observing facilities, enabling astronomers to make important scientific discoveries. ESO also plays a leading role in promoting and organising cooperation in astronomical research. ESO operates three unique world-class observing sites in Chile: La Silla, Paranal and Chajnantor. At Paranal, ESO operates the Very Large Telescope, the world’s most advanced visible-light astronomical observatory, and two survey telescopes. VISTA works in the infrared and is the world’s largest survey telescope and the VLT Survey Telescope is the largest telescope designed to exclusively survey the skies in visible light. ESO is a major partner in ALMA, the largest astronomical project in existence. And on Cerro Armazones, close to Paranal, ESO is building the 39-metre Extremely Large Telescope, the ELT, which will become “the world’s biggest eye on the sky”. 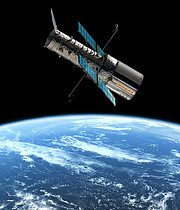 PR Image ann18034d
The Hubble Space Telescope in orbit
Send us your comments!
Subscribe to receive news from ESO in your language
Accelerated by CDN77
Terms & Conditions