CERN, ESA, ESO and UNESCO in partnership with the Italian Institute of Astrophysics (INAF), invite the public to participate in Origins 2013, a unique event to take place simultaneously in Geneva, Paris and Bologna on European Researchers’ Night, Friday 27 September 2013. People around the world can follow the event live through webcasts.

What do particle physics, astrophysics and space research have in common? They all address fundamental questions linked to our origins: the origin of matter, the origin of the Universe, and potentially, the origins of life itself.

In the last few months, the Large Hadron Collider, with the discovery of a Higgs boson, and the Planck satellite, with the release of the most precise picture so far of the very early Universe, have achieved major scientific breakthroughs. In addition, the ALMA telescope array was recently inaugurated in Chile. ALMA is the largest astronomy project in existence and will enable unprecedented views of the cosmos.

Origins 2013 will showcase these fascinating scientific endeavours. This unique event highlights the strong links between the very small domain of particle physics and the very large of astrophysics, and researchers in the two fields will share their passion and insights with the general public.

The public at CERN in Geneva, UNESCO Headquarters in Paris and in the city centre of Bologna, will be taken on a journey back in space and time, to learn more about the origins of the Universe from the sudden expansion of space 13.8 billion years ago. In the three locations, visitors will be able to meet researchers who took part in these scientific achievements through face-to-face speed dating discussions.

“With Origins 2013, we want to celebrate the thousands of researchers who, through their work at frontier scientific instruments such as Planck and the LHC, have taken mankind one step further in understanding the origins of our Universe and provided a new picture of its composition today,” said Sergio Bertolucci, CERN’s Director for Research. He will open the event on Friday 27 September along with Mark McCaughrean, Head of the Research and Scientific Support Department of ESA. They will be linked by videoconference with Gretchen Kalonji, UNESCO’s Assistant Director-General for Natural Sciences, who will be opening the event at UNESCO in Paris.

Video conferences will link the three European cities to the ESA Planck Mission Operations Control Centre in Darmstadt, Germany; the ALMA Observatory in the Atacama Desert of Chile; and the LHC tunnel, 100 metres underground near Geneva, Switzerland. In addition, there will be a live link to ESA astronaut Luca Parmitano aboard the International Space Station.

Reservations for the speed dating and live webcast at CERN must be made via the ORIGINS website.

Origins 2013 is a project designed by CERN and realised in partnership with INAF with the collaboration of ESO, ESA and UNESCO. 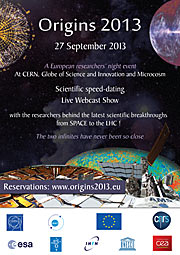 PR Image ann13076a
Origins 2013 poster
Send us your comments!
Subscribe to receive news from ESO in your language
Accelerated by CDN77
Terms & Conditions