The winner of the 2013 European Astronomy Journalism Prize is author and astronomy journalist Stuart Clark for his piece When the dust unsettles. The article was featured in the weekly British science magazine New Scientist and looks at cosmic dust, the starting point for building whole planets and much else besides.

The award was announced at the British Science Festival 2013 media reception, sponsored by the Science and Technology Facilities Council (STFC), on 11 September 2013. The competition aims to promote coverage of astronomy and space science to further engage the public in science. This is particularly important as astronomy and space science are regularly referred to as core reasons that people are inspired to take up careers in science.

The prize for the competition is a trip to Chile to see ESO’s Very Large Telescope, the world’s most advanced optical instrument.

The five judges on the panel were representatives of ESO, STFC, the Royal Astronomical Society and the Association of British Science Writers, along with journalist Dirk Lorenzen.

Stuart said: “It is such an honour to win the European Astronomy Journalism Prize. Not only does Europe have an intensely rich history of astronomy behind it, I believe that it has is an even brighter future stretching ahead. I'm proud to represent that in my work. Articles like this can only come about by collaborating with great editors and so I would like to share this award with Richard Webb and Valerie Jamieson of New Scientist.”

STFC Head of Communications and competition judge, Terry O’Connor, added. “Stuart’s piece was a joy to read. It was well written, in a style accessible for the general public, and addressed an area of fundamental astronomical research, but it also crucially added the human element — healthy disagreement between scientists about the meaning of data, which gave the reader an insight into a common driver of breakthrough research.”

Sandra entered the competition with her piece, ALMA — the birth of a giant telescope and Jonathan with his article, The first fractions of a second after the Big Bang.

Sandra said: “The Universe has a lot of stories to tell and I like to show people how scientists try to decode these messages. I am very happy that the jury appreciated how I talk about it. This competition proved to me that there are no national borders in science or in science communication.”

Stuart will take up his prize trip to Chile later this year.

STFC
The Science and Technology Facilities Council is keeping the UK at the forefront of international science and tackling some of the most significant challenges facing society such as meeting our future energy needs, monitoring and understanding climate change, and global security.

STFC also has an extensive public outreach and engagement programme. It is using its world leading research to inspire and enthuse schools and the general public about the impact and benefits that science can have on society.

STFC is one of seven publicly-funded research councils. It is an independent, non-departmental public body of the Department for Business, Innovation and Skills (BIS).

Royal Astronomical Society
The Royal Astronomical Society (RAS: www.ras.org.uk), founded in 1820, encourages and promotes the study of astronomy, solar-system science, geophysics and closely related branches of science. The RAS organises scientific meetings, publishes international research and review journals, recognizes outstanding achievements by the award of medals and prizes, maintains an extensive library, supports education through grants and outreach activities and represents UK astronomy nationally and internationally. Its more than 3500 members (Fellows), a third based overseas, include scientific researchers in universities, observatories and laboratories as well as historians of astronomy and others.

Association of British Science Writers
Founded in 1947, the (ABSW http://www.absw.org.uk/) is the professional organisation for science writers in the UK. Its 800 members write everything from news stories to books and TV programmes. It runs the UK’s science journalism awards, holds the UK Conference of Science Journalists, and helps entrants to the profession to expand their skills. It is a leading member of the World Federation of Science Journalists and is involved in promoting science journalism in the developing world.

ESO
ESO is the foremost intergovernmental astronomy organisation in Europe and the world’s most productive ground-based astronomical observatory by far. It is supported by 15 countries: Austria, Belgium, Brazil, the Czech Republic, Denmark, France, Finland, Germany, Italy, the Netherlands, Portugal, Spain, Sweden, Switzerland and the United Kingdom. ESO carries out an ambitious programme focused on the design, construction and operation of powerful ground-based observing facilities enabling astronomers to make important scientific discoveries. ESO also plays a leading role in promoting and organising cooperation in astronomical research. ESO operates three unique world-class observing sites in Chile: La Silla, Paranal and Chajnantor. At Paranal, ESO operates the Very Large Telescope, the world’s most advanced visible-light astronomical observatory and two survey telescopes. VISTA works in the infrared and is the world’s largest survey telescope and the VLT Survey Telescope is the largest telescope designed to exclusively survey the skies in visible light. ESO is the European partner of a revolutionary astronomical telescope ALMA, the largest astronomical project in existence. ESO is currently planning the 39-metre European Extremely Large optical/near-infrared Telescope, the E-ELT, which will become “the world’s biggest eye on the sky”. 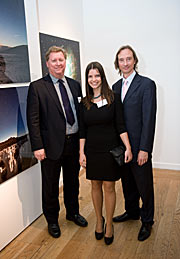 PR Image ann13072a
The winner of the 2013 European Astronomy Journalism Prize
Send us your comments!
Subscribe to receive news from ESO in your language
Accelerated by CDN77
Terms & Conditions