ALMA — A new radio observatory in the thin desert air

The exploration of the Universe using radio waves is an exciting research area that has been in continuous development since the mid-20th century. ALMA, a new radio observatory, is being built at an altitude of over 5000 metres in the Atacama Desert in Chile. It will eventually include 66 individual telescopes, working together to collect submillimetre and millimetre radio waves. What are these waves from outer space? Why are they useful for observing the cosmos? Wolfgang Wild, the European ALMA Project Manager from ESO will answer these questions, as well as those from the audience of the Café & Kosmos.

The Café & Kosmos series of discussions is organised jointly by ESO, the Excellence Cluster Universe and the Max-Planck Institutes for Physics, Astrophysics and Extraterrestrial Physics. The discussions take place on the second Tuesday of each month at the Vereinsheim, in Munich (please note the change of day and venue, as of May 2011). After a brief introduction the scientists take questions from the audience and discuss current issues from the cosmos. 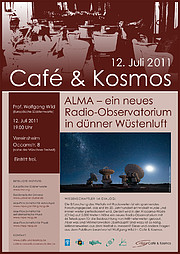