Spinstars: The First Polluters of the Universe?

By studying some of the oldest stars in our galaxy, an international team of astronomers led by Cristina Chiappini [1] has used data from ESO’s Very Large Telescope to show that the first massive stars in the Universe were probably very fast rotators, which they have dubbed spinstars. Their findings will be published in an article in Nature on 28 April 2011.

Massive stars live fast and die young, so the first generation of massive stars in the Universe is already dead. However, their chemical imprint, left behind like an incriminating fingerprint, can still be found today in the oldest stars in the Milky Way. These fossil records provide valuable clues about the mysterious first stellar generation to enrich the pristine early Universe.

Soon after the Big Bang, the Universe was made almost entirely of hydrogen and helium. It was only enriched with other elements around 300 million years later with the death of the first generation of massive stars. These polluted the primordial gas with new chemical elements, which were then incorporated into subsequent stellar generations.

Using data from ESO’s Very Large Telescope (VLT), astronomers have reanalysed the spectra of a group of very old stars in the Milky Way. These stars are so old that only very massive, short-lived stars with masses larger than around ten times the mass of our Sun would have had time to die and to pollute the gas from which they formed.

As expected, the chemical composition of the observed stars showed elements typical for enrichment by massive stars. However, the new analysis unexpectedly also revealed the presence of elements that are usually thought to be produced only by longer-lived stars of smaller masses. Fast-rotating massive stars, on the other hand, would succeed in manufacturing these elements themselves.

The impact of the existence of an early generation of spinstars in the Universe is major. Fast rotation rates also affect other properties of a star, such as its colour, its lifetime and its luminosity. Spinstars would therefore also have strongly influenced the properties and appearance of the first galaxies that formed in the Universe.

The existence of spinstars is now also supported by recent independent studies of how the first stars of the Universe might form. 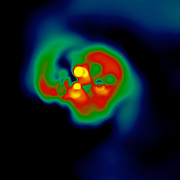 PR Image ann11023a
The formation of the first, fast-spinning stars
Send us your comments!
Subscribe to receive news from ESO in your language
Accelerated by CDN77
Terms & Conditions