ESO — World’s Most Productive Observatory for the Fourth Year

A survey of scientific journals has shown that 2010 was the most productive year in ESO’s history. The ESO user community, using data from ESO telescopes, published more than 750 peer-reviewed papers. For the fourth year in a row, ESO is the most productive astronomical observatory in the world in terms of number of publications from its users.

Counting the number of articles that are based on data from an observatory’s telescopes is an important indicator of how productive it is. As such, it is common practice for organisations like ESO to carry out regular reviews to determine their scientific productivity. ESO’s annual survey of the major scientific journals shows that, with a haul of more than 750 peer-reviewed papers published in 2010 by the ESO community, using data from ESO telescopes, the observatory has broken its previous record set in 2007.

Every observatory uses slightly different methods to measure these figures (for example, searching different collections of journals), meaning they cannot always be compared exactly. However, with a publication haul slightly ahead of the NASA/ESA Hubble Space Telescope, and far ahead of any other ground-based observatory, these figures are unambiguous: ESO and its user community is a scientific powerhouse, making a major contribution to astronomy. It is the fourth successive year that ESO has had the largest number of publications of any observatory on or above the Earth.

Even taken separately, ESO’s sites at Paranal and La Silla individually outperform all other observatories on the ground. For the first time, over 500 papers were credited to Paranal alone, while La Silla shows a publication record of just under 300, in line with previous years, as would be expected from a mature, well-functioning scientific facility [1].

After the recent accession of Brazil, the ESO community now includes about one third of the world’s astronomers [2]. In addition the Very Large Telescope at ESO’s Paranal Observatory reached its full instrument complement some years ago and is now a mature observatory. These factors go some way to explaining the pre-eminence of ESO at this point.

These publication statistics give an idea of how much scientific work gets done with data from the individual observatories, but does not address the impact of this science. A study of the citation rates for articles, which measures how influential scientific results are, is planned to answer this question.

[1] The data show a total of 751 papers, made up of 507 based on Paranal data, 296 based on La Silla data and 29 on APEX data. Some papers include data from more than one ESO site and are counted only once in the total figure, hence the total number is slightly lower than the sum of the three observatory totals.

[2] This figure is based on the number of members of the International Astronomical Union (IAU) in different countries.

This research was carried out by the ESO Library. The methodology is discussed in the document “ESO Publication Statistics”, available from the Library’s website (http://www.eso.org/libraries/) and via the PDF link below. 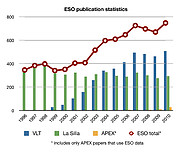 PR Image ann11011b
ESO publication statistics by year
Send us your comments!
Subscribe to receive news from ESO in your language
Accelerated by CDN77
Terms & Conditions