Dutch astronomer instrumental in the founding of ESO has passed away

“Adriaan Blaauw was one of the most influential astronomers of the twentieth century. I had the privilege to be amongst his students when he returned to Leiden from his position as Director General. He continued to remain keenly interested in everything to do with ESO, and still had his characteristic twinkle in the eye when he visited La Silla and Paranal earlier this year. It is hard to grasp that he is no longer with us,” said ESO’s current Director General, Professor Tim de Zeeuw.

Adriaan Blaauw was born in Amsterdam, the Netherlands, in 1914. He studied astronomy at Leiden University, under de Sitter, Hertzsprung and Oort, and obtained his doctorate with van Rhijn at the Kapteyn Laboratory in Groningen in 1946, with a thesis entitled “A study of the Scorpio–Centaurus cluster”. During his career, Blaauw studied the properties of OB associations (groups of young, hot stars) which contain the fossil record of their star formation history. Perhaps his most famous work explained why some of these stars are found to be travelling unusually rapidly — so-called run-away stars. Blaauw proposed that these stars had originally been members of binary systems, but that when one star in the binary experiences a supernova explosion, its companion suddenly ceases to feel the gravitational pull that keeps it in its orbit and hence it “runs away” at its orbital velocity. This work was published in his 1961 paper “On the origin of the O- and B-type stars with high velocities (the ‘run-away’ stars), and some related problems”.

In addition to his distinguished research career, Blaauw played a central role in setting up ESO. In 1953, the astronomers Walter Baade and Jan Oort proposed the idea of pooling European resources and funding to create an astronomical research organisation that could compete on the international level. Blaauw had returned to Leiden in 1948, moved to Yerkes Observatory in 1953, becoming its associate director in 1956, and moved back to Groningen in 1957, where he was in a key position to contribute to putting the idea of Baade and Oort into practice.

ESO was founded in 1962, and Blaauw took up the position of Scientific Director in 1968 and subsequently became the organisation’s second Director General from 1970 until 1974. During that time, several telescopes including the ESO 0.5-metre and 1-metre Schmidt telescopes began operating at ESO’s first observatory site, La Silla, in Chile. This was also a key period for the design and construction of the ESO 3.6-metre telescope, which had its first light in 1976. Blaauw decided that it was crucial for this project to move ESO Headquarters from Hamburg to Geneva, to benefit from the presence of the CERN engineering group. Today, the 3.6-metre telescope remains at the forefront of research, hosting the HARPS spectrograph — the world’s foremost exoplanet hunter.

”The early years for any organisation, particularly one in which half a dozen countries and their governments are involved, can provide many challenges. But with Adriaan Blaauw’s leadership, preceded by Otto Heckmann, ESO started off on a strong footing,” said de Zeeuw.

After stepping down as Director General of ESO, Blaauw returned to Leiden, and continued to play a very important role in international astronomy. He was President of the International Astronomical Union from 1976 to 1979, during which period he managed to convince China to rejoin the IAU. Blaauw retired in 1981 and moved back to Groningen, but stayed active. He served as Chairman of the Scientific Evaluation Committee for the European Space Agency satellite Hipparcos, advising on many aspects of its scientific programme.

Blaauw was well-known for his legendary patience and wisdom, and for his genuine interest in astronomy and astronomers, including the most junior students. He liked to quietly bring order to most topics that he turned his attention to. This included the archives of ESO and of the IAU — work which resulted in two books, ESO’s Early History and History of the IAU. His personal account of his life entitled My Cruise Through the World of Astronomy, published in the 2004 Annual Reviews of Astronomy and Astrophysics, provides an extraordinarily accurate picture of a truly remarkable person, who influenced the lives of many others in a very positive way. 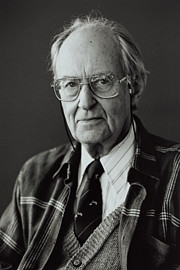 PR Video blaauwstatementc
Prof. Adriaan Blaauw (1914–2010) speaks about ESO's collaboration with CERN
Send us your comments!
Subscribe to receive news from ESO in your language
Accelerated by CDN77
Terms & Conditions