Several high-level European delegations visited ESO's Paranal Observatory in northern Chile over the past few days, following the Summit of the Community of Latin American and Caribbean States–European Union (CELAC–EU). The summit, which is the biggest such event ever organised by Chile, took place in Santiago during the week of 22–28 January 2013. ESO had a starring role in the event and it was an excellent opportunity for it to show its work and facilities to representatives of the Member States.

Sixty one heads of state and of governments from Latin America, the Caribbean and the European Union were invited to the summit, along with ministers and other officials. The goal of the meeting was to build a strategic alliance for sustainable development and the creation of a political, economic, physical and energy integration scheme.

Herman Van Rompuy and José Manuel Barroso independently visited ESO’s Paranal Observatory, which is in Chile’s Atacama Desert, at an altitude 2635 metres above sea level. They were both taken on tours of the observatory by Tim de Zeeuw, ESO’s Director General, where they admired the four 8.2-metre telescopes which comprise the Very Large Telescope (VLT), the most advanced optical/infrared telescope in the world. They also toured Paranal’s award-winning Residencia, the observatory’s accommodation and office building.

During his visit, Herman Van Rompuy declared: “The extraordinary telescopes here are a tribute to European scientists and industry, but also a tribute to how effectively they work together within ESO, both with other Member States and with the host nation of Chile. Paranal is a powerful symbol of humanity's quest for knowledge and of international cooperation.”

José Manuel Barroso expressed his gratitude for the opportunity to visit ESO’s Paranal Observatory: “This has been a great chance to visit this spectacular place and see at first hand the fruits of the collaboration of many European countries in the field of astronomy. It is of paramount importance that we explore the frontiers of science and deepen our knowledge of the Universe. As an European I am proud to see that we keep this ambitious goal.”

Tim de Zeeuw, ESO’s Director General, added: “We are honoured to receive the leaders of the European Union as well as representatives from European countries here in Paranal and present our work to them. ESO is a great example of how people from many different countries and cultural backgrounds have come together to bring astronomy in our Member States and the host nation of Chile to the forefront of astronomical research in the world”.

ESO’s Representative in Chile, Massimo Tarenghi concluded: “We are thankful for the long-standing support from our European Member States, and also for the strong support from the Chilean government, which have enabled us to do state-of-the-art science here in Chile with the VLT, and to plan the European Extremely Large Telescope, the world’s biggest eye on the sky.”

In addition, Kate Smith, Director for the Americas of the UK’s Foreign & Commonwealth Office, visited ESO’s offices in Santiago where ESO’s work in Chile is coordinated.

ESO was also invited to exhibit some of its work at the CELAC–EU summit, held at Espacio Riesco in Santiago. The stars themselves were also a theme in the logo of the summit, based on the renowned work by Chilean sculptor Mario Irarrázabal, and featuring stars representing the skies of northern Chile. ESO’s Awesome Universe exhibition, created to celebrate the organisation’s 50th anniversary in 2012, was chosen to decorate the area, as were ESO images of astronomical objects observed by ESO telescopes that are normally displayed in the Presidential Palace in Santiago.

PR Image eso1305a
President of the European Council, Herman Van Rompuy, during a visit to the Paranal Observatory

PR Image eso1305b
The President of the European Commission, José Manuel Barroso, during a visit to ESO’s Paranal Observatory

PR Image eso1305d
The Prime Minister of France, Jean-Marc Ayrault, and Massimo Tarenghi at the CELAC–EU summit in Santiago 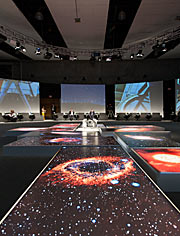 PR Video eso1305a
Visit of José Manuel Barroso to the VLT
Send us your comments!
Subscribe to receive news from ESO in your language
Accelerated by CDN77
Terms & Conditions