Observations of “Jellyfish galaxies” with ESO’s Very Large Telescope have revealed a previously unknown way to fuel supermassive black holes. It seems the mechanism that produces the tentacles of gas and newborn stars that give these galaxies their nickname also makes it possible for the gas to reach the central regions of the galaxies, feeding the black hole that lurks in each of them and causing it to shine brilliantly. The results appeared today in the journal Nature.

An Italian-led team of astronomers used the MUSE (Multi-Unit Spectroscopic Explorer) instrument on the Very Large Telescope (VLT) at ESO’s Paranal Observatory in Chile to study how gas can be stripped from galaxies. They focused on extreme examples of jellyfish galaxies in nearby galaxy clusters, named after the remarkable long “tentacles” of material that extend for tens of thousands of light-years beyond their galactic discs [1][2].

The tentacles of jellyfish galaxies are produced in galaxy clusters by a process called ram pressure stripping. Their mutual gravitational attraction causes galaxies to fall at high speed into galaxy clusters, where they encounter a hot, dense gas which acts like a powerful wind, forcing tails of gas out of the galaxy’s disc and triggering starbursts within it.

Six out of the seven jellyfish galaxies in the study were found to host a supermassive black hole at the centre, feeding on the surrounding gas [3]. This fraction is unexpectedly high — among galaxies in general the fraction is less than one in ten.

“This strong link between ram pressure stripping and active black holes was not predicted and has never been reported before,” said team leader Bianca Poggianti from the INAF-Astronomical Observatory of Padova in Italy. “It seems that the central black hole is being fed because some of the gas, rather than being removed, reaches the galaxy centre.” [4]

Yara Jaffé, an ESO fellow who contributed to the paper explains the significance: “These MUSE observations suggest a novel mechanism for gas to be funnelled towards the black hole’s neighbourhood. This result is important because it provides a new piece in the puzzle of the poorly understood connections between supermassive black holes and their host galaxies.”

The current observations are part of a much more extensive study of many more jellyfish galaxies that is currently in progress.

“This survey, when completed, will reveal how many, and which, gas-rich galaxies entering clusters go through a period of increased activity at their cores,” concludes Poggianti. “A long-standing puzzle in astronomy has been to understand how galaxies form and change in our expanding and evolving Universe. Jellyfish galaxies are a key to understanding galaxy evolution as they are galaxies caught in the middle of a dramatic transformation.”

[1] To date, just over 400 candidate jellyfish galaxies have been found.

[2] The results were produced as part of the observational programme known as GASP (GAs Stripping Phenomena in galaxies with MUSE), which is an ESO Large Programme aimed at studying where, how and why gas can be removed from galaxies. GASP is obtaining deep, detailed MUSE data for 114 galaxies in various environments, specifically targeting jellyfish galaxies. Observations are currently in progress.

[3] It is well established that almost every, if not every, galaxy hosts a supermassive black hole at its centre, between a few million and a few billion times as massive as our Sun. When a black hole pulls in matter from its surroundings, it emits electromagnetic energy, giving rise to some of the most energetic of astrophysical phenomena: active galactic nuclei (AGN).

[4] The team also investigated the alternative explanation that the central AGN activity contributes to stripping gas from the galaxies, but considered it less likely. Inside the galaxy cluster, the jellyfish galaxies are located in a zone where the hot, dense gas of the intergalactic medium is particularly likely to create the galaxy’s long tentacles, reducing the possibility that they are created by AGN activity. There is therefore stronger evidence that ram pressure triggers the AGN and not vice versa.

This research was presented in a paper entitled “Ram Pressure Feeding Supermassive Black Holes” by B. Poggianti et al., to appear in the journal Nature on 17 August 2017. 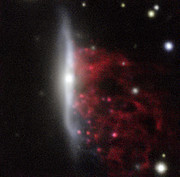