Dominating this image is part of the gigantic nebula Gum 56, illuminated by the hot bright young stars that were born within it. For millions of years stars have been created out of the gas in this nebula, material which is later returned to the stellar nursery when the aging stars either expel their material gently into space or eject it more dramatically as supernova explosions. This image was taken with the MPG/ESO 2.2-metre telescope at the La Silla Observatory in Chile as part of ESO’s Cosmic Gems programme.

Deeply immersed in this huge stellar nursery are three clusters of hot young stars — only a few million years old — which glow brightly in ultraviolet light. It is the light from these stars that causes the nebula’s gas clouds to glow. The radiation strips electrons from atoms — a process known as ionisation — and when they recombine they release energy in the form of light. Each chemical element emits light in characteristic colours and the large clouds of hydrogen in the nebula are the cause of its rich red glow.

Gum 56 — also known as IC 4628 or by its nickname, the Prawn Nebula — is named after the Australian astronomer Colin Stanley Gum, who, in 1955, published a catalogue of H II regions. H II regions such as Gum 56 are huge, low density clouds containing a large amount of ionised hydrogen.

A large portion of the ionisation in Gum 56 is done by two O-type stars, which are hot blue–white stars, also known as blue giants because of their colour [1]. This type of star is rare in the Universe as the very large mass of blue giants means that they do not live for long. After only roughly a million years these stars will collapse in on themselves and end their lives as supernovae, as will many of the other massive stars within the nebula.

Besides the many newborn stars nestled in the nebula, this large region is still filled with enough dust and gas to create an even newer generation of stars. The regions of the nebula giving birth to new stars are visible in the image as dense clouds. The material forming these new stars includes the remains of the most massive stars from an older generation that have already ended their lives and ejected their material in violent supernova explosions. Thus the cycle of stellar life and death continues.

Given the two very unusual blue giants in this area and the prominence of the nebula at infrared and radio wavelengths, it is perhaps surprising that this region has been comparatively little studied as yet by professional astronomers. Gum 56 has a diameter of around 250 light-years, but despite its huge size it has also often been overlooked by visual observers due to its faintness, and because most of the light it emits is at wavelengths not visible to the human eye.

The nebula is at a distance of about 6000 light-years from Earth. In the sky it can be found in the constellation Scorpius (The Scorpion) where it has a projected size which is four times the size of the full Moon [2].

This image, which only captures a part of the nebula, was taken with the 2.2-metre MPG/ESO telescope using the Wide Field Imager (WFI) camera as part of the ESO Cosmic Gems programme. The programme makes use of telescope time that cannot be used for science observations to produce images of interesting, intriguing or visually attractive objects. All data collected may also be suitable for scientific purposes, and are made available to astronomers through ESO’s science archive.

[1] Note that these stars fall outside the field of view of this particular image and do not appear in the picture.

[2] A wide-angle view of the Prawn Nebula taken by the VLT Survey Telescope was published earlier (eso1340a). 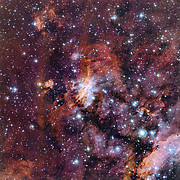 PR відео eso1535a
Zooming in on the Prawn Nebula