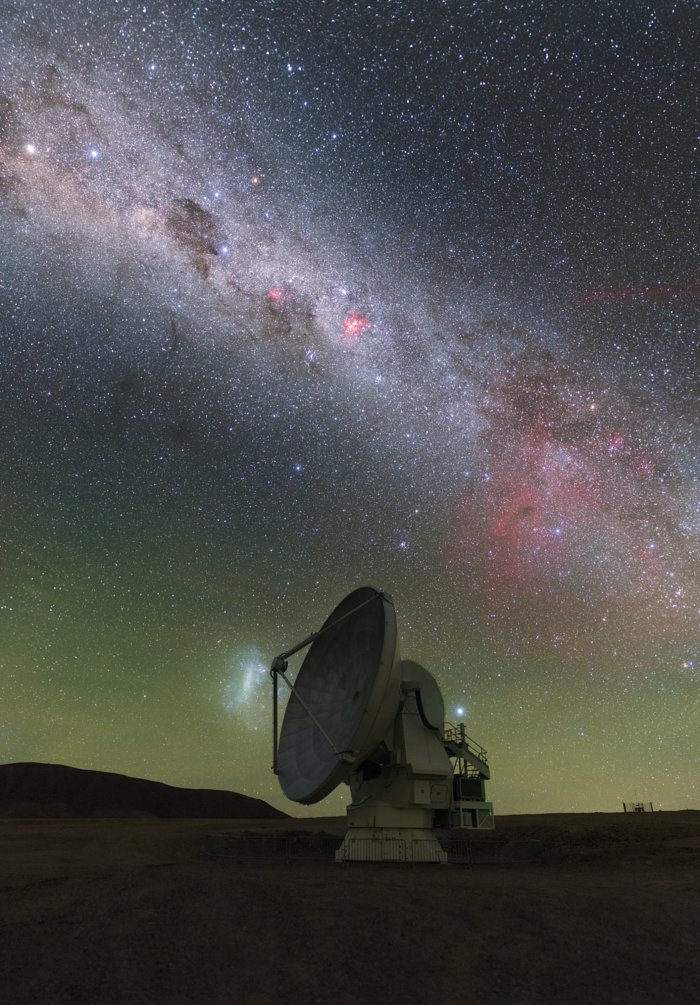 This Picture of the Week appears to show a lone antenna gazing at the sky — but in reality this antenna is far from lonely. It is part of the Atacama Large Millimeter/submillimeter Array (ALMA), a telescope that comprises 66 high-precision antennas spread out across the Chajnantor plateau, located high up in the Chilean Andes. In this image we are treated to a spectacularly multi-coloured view of the sky above ALMA: green airglow hovers above the horizon, the Large Magellanic Cloud peeks out from behind the antenna, and the magnificent sprawl of the Milky Way stretches out overhead.

These antennas are optimised to collect light at millimetre wavelengths, between infrared and radio waves, giving ALMA a view of the Universe that is very different to our own. Human eyes have evolved to see visible light while ALMA views the cosmos at longer wavelengths, picking up light from some of the coldest objects in the Universe — dense star-forming clouds, discs of debris around newborn stars, distant galaxies, and more. ALMA can probe these objects with unprecedented sensitivity and resolution. The array has observed Einstein Rings, imaged protoplanetarydiscs, and detected complex organic molecules within such discs, suggesting that the Solar System may not be unique in its ability to foster life.