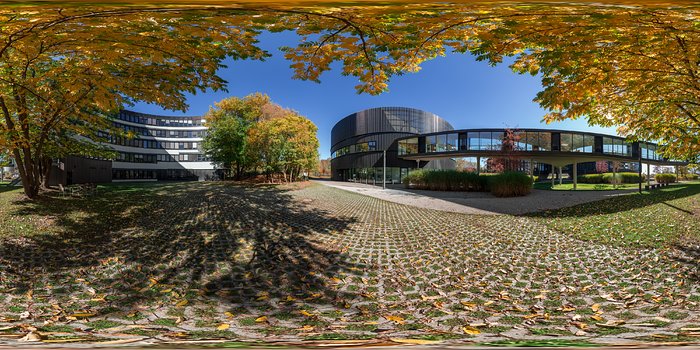 Autumn has arrived, and the colours of the temperate Northern Hemisphere are slowly changing. This photo, taken by ESO Photo Ambassador‌ ​Petr Horálek, shows the two main buildings of ESO’s Headquarters in Garching, Germany, surrounded by the wondrous golden hues that announce the beginning of the season.

Not all parts of the globe experience autumn; the tropics experience few changes in sunlight through the year, and polar regions lack a transitory season between summer and winter. Only northern and southern temperate regions have the chance to observe abscission, the annual shedding of leaves, for a few months each year (starting in September and March respectively). But why do tree leaves change their colours?

Rather than attempting to endure the limited light levels and cold temperatures that accompany the autumnal and wintry months, so-called deciduous plants prefer to rest — and autumn represents the seasonal preparation for this period of dormancy. Plants start by reabsorbing chlorophyll, their main and most valuable pigment which reflects green light, from their leaves, allowing complementary pigments such as carotenoids (which reflect orange light) or xanthophylls (which reflect yellow light) their time to shine. These leaves will eventually fall, creating yellow-orange carpets like the one pictured here.